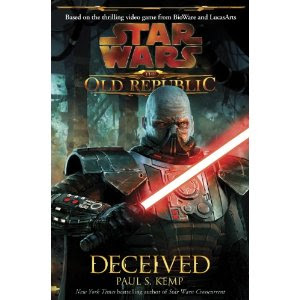 Author Paul S. Kemp gave fans a bit of food to tide their hunger over for his upcoming The Old Republic novel today. Entitled Deceived, Kemp’s tie-in novel to the upcoming game will focus on the characters, and even some of the events, seen in the cinematic “Deceived” trailer for The Old Republic from last year.
Here’s an excerpt from his excerpt:

Ahead, he saw the four towers surrounding the stacked tiers of the Jedi Temple, its ancient stone as orange as fire in the light of the setting sun. The civilians seemed to give it a wide berth, as if it were a holy place, rather than a place of sacrilege.

He would reduce it to rubble.

He walked toward it and fate walked beside him.

Statues of long-dead Jedi Masters lined the approach to the Temple’s enormous doorway. The setting sun stretched the statue’s tenebrous forms across the duracrete. He walked through the shadows and past them, noting some names: Odan Urr, Ooroo, Arca Jeth.

“You have been deceived,” he whispered to them. “Your time is past.”

Be sure to check out the excerpt for Star Wars: The Old Republic: Deceived, if you’re so inclined, and pick up it up when it hits December 28, 2010 as a hardcover.