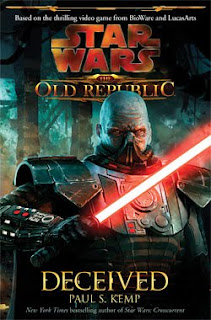 As many Star Wars novel readers are no doubt aware, each novel contains a “Dramatis Personae”; a list of characters that readers are about to see in the novel and who they are. Author Paul S. Kemp (EUC’s interview) has given readers a first look at his upcoming novel The Old Republic: Deceived by posting the Dramatis Personae.

It can be considered spoiler-filled, but if you’re so inclined, you can check it out here.

I’m hoping to get approval in July to begin posting excerpts from Deceived, my Star Wars novel set in the The Old Republic.  But in the meantime, I thought I’d  post the Dramatis Personae for the novel.  There are four core characters (these four are either point of view characters, or characters with a lot of  screen time) and several important, but non-core characters.