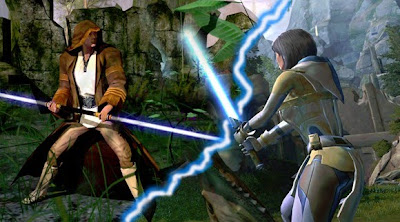 Massively reports that a  one of Star Wars Galaxies’ developers, and apparently a fan-beloved one, has moved on to join the The Old Republic development team:

Massively has learned some exciting news for Star Wars: The Old Republic and sad news for Star Wars Galaxies. According to his Linked-In profile, the fan-beloved developer, Matt Boudreaux, landed a new job at Bioware’s Austin studios working on SWTOR. Boudreaux, known as AdeptStrain on the SOE forums, implemented some of the most ground-breaking additions to the aging game Star Wars Galaxies, such as new Jedi and melee animations, the Appearance Tab, and the Chronicles System. His role on the SWG team was solidified by his role in creating some of the best instances like Hoth and Death Troopers.

His wit and easygoing demeanor gained AdeptStrain quick rapport among fans. Roleplayers, in particular, have a vested interest in his work because of the added character customization given by the Appearance Tab. Some players are even considering moving to SWTOR just because AdeptStrain is now a part of the team. A loss for SWG truly is a gain for SWTOR.

Based on their job postings, it does not seem that SOE are looking for a replacement, but when they do, he or she will have big shoes to fill. We at Massively congratulate Matt on his new position and wish him well.

If you played SWG in the last two years or so, you know me as AdeptStrain. For everyone else, nice to meet you!

I’m insanely excited to be working here at BioWare. The magnitude of talent here is quite staggering and I hope to contribute in any way I can to make TOR an amazing experience for all. While SWG will always have a special place in my heart, I’m very excited to put all my energies into TOR and help to try and create something really amazing.

I can’t wait to start having some interesting conversations. Till then, I’ll be diligently working on my various tasks.
– Matt

Replying to questions about his ingame allegiance and class:

I honestly have no idea. I normally like being on the good side of things, but I also tend to find the light side a bit whiny for my tastes (seriously, watch Luke in A New Hope). As for class, I personally think the Trooper class is pretty awesome.

The best of luck to Matt in his new job and congratulations to both him and BioWare on the new partnership.