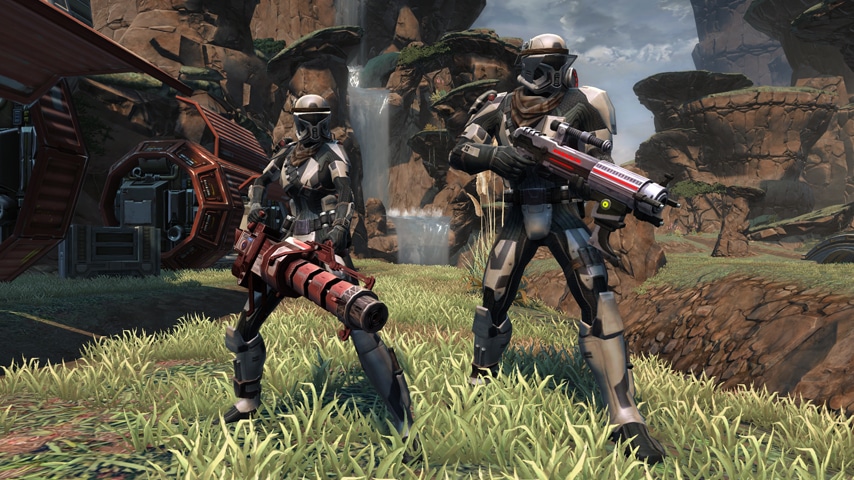 BioWare continue there developer blog updates on class changes in Star Wars: The old republic – Rise of the Hutt cartel. You can read the whole article over at the official SWTOR Website or continue reading below.

Hello everyone. My name is Austin Peckenpaugh, and I’m a Senior Designer on Star Wars™: The Old Republic™, responsible for class design and combat systems. As such, I’m here to shed some light on the changes to the Trooper class in Game Update 2.0.

A big “behind the scenes” change for Troopers in 2.0 is the new resource system, which effectively puts Troopers on the same “energy system” as Bounty Hunters. Prior to 2.0, the Trooper’s resources functioned similarly to and effectively emulated the Bounty Hunter’s heat, mechanically speaking, but they were functionally quite different. Now in 2.0, the Trooper’s energy cells are on a 100-point scale instead of a 12-point scale. You will notice that your abilities have new, higher costs, but do not despair – they are proportionately the same as before!

What this new system has done (aside from making development on the Trooper a lot simpler for us) is to finally put the Trooper and Bounty Hunter on the same scale, affording both classes the same level of granularity. Hopefully you won’t notice a difference as players, but the new system will require Trooper players to think of their resource costs on a different scale.

We have a few simple goals for Commandos in 2.0. From a PVE perspective, we want to ensure their rotations are fun and effective. Beyond rotations, we want Commandos to have better group support and self survivability. These goals translate into PVP as well, where we also want Commandos to be more mobile and have better utility. In short, we’ve heard your complaints, and there are a lot of new goodies in store for Commandos.

Below are some additional details on changes made to the Commando’s skill trees. Many more skills than the ones mentioned here have changed; these are really just the highlights.

Our intentions with the Combat Medic skill tree fall in-line with our overarching goals for the Commando. Combat Medics get cool new utility, a better arsenal of healing abilities for different situations, and some improvements to existing abilities.

Below are some additional details on changes made to the Vanguard’s skill trees. Many more skills than the ones mentioned here have changed; these are really just the highlights.

For 2.0, we wanted to make sure Shield Specialist’s active abilities were very attractive. Both Riot Gas (previously Smoke Grenade) and Energy Blast have been overhauled to be more universally awesome. We also wanted to boost up Shield Specialist’s utility and group support by way of giving them some area denial and area slows.