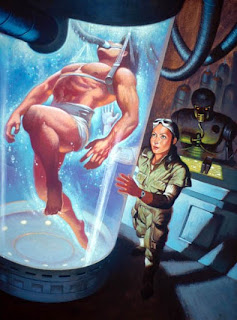 A miracle of modern medical technology, the bacta tank is a mainstay in both Imperial and Republic medical wards. The containment cylinder fills with rejuvenating bacta fluid that is capable of healing even the most grievous wounds. The translucent red fluid nurtures the growth of a bacterial medium that seeks out traumatized tissue and promotes regeneration and growth to rapidly heal wounds with minimal or no scarring. Medical droids closely monitor the patient, who is suspended in the fluid.

Bacta could be administered through disposable bacta patches, injection, or by submersion in a bacta tank. Bacta was also used in portable lotion form. The method of administration depended on the severity of the wounds. Bacta must be applied in a solution of clear synthetic fluid which mimics the body’s own vital fluids.

Bacta had a smell that was described as ‘sickly-sweet’; immersion in a bacta tank could leave one with the taste and smell of bacta for weeks afterwards, and even bacta patches left such residue (although presumably less strong and shorter lasting).

In terms of in-universe chronology, the earliest mention of bacta occurred in the Tales of the Jedi: Dark Lords of the Sith audio drama. It was also mentioned (later in galactic history) in Star Wars Knights of the Old Republic 3: Commencement, Part 3. However, the author, John Jackson Miller, admits that this may be a continuity error, and proposed a possible retcon, asserting that Marn Hierogryph was referring to some other thing coincidentally named bacta in the comic. The issue was resolved with a reference in The Essential Atlas to bacta’s discovery about a century before the Tales of the Jedi series.
Kolto tanks were the predecessor to bacta tanks, and of course were later replaced in favor of bacta, which explains the similarity in appearance between the two.

Bacta was invented by the Vratix on the planet Thyferra around the year 4000 BBY. The Vratix were willing to share the technology, but the substance could only be made on their homeworld where the needed resources were abundant. Struggles on Thyferra were often caused by disputes over control of bacta, often between the two main producers of bacta, the Zaltin Corporation and the Xucphra Corporation, or over the bacta the planet produced. Before its obsolescence, kolto was used along with bacta for medical treatments. Bacta later outsold kolto and eventually replaced it altogether.

Potency
Bacta was often produced in various strengths and potencies based on many different factors. A batch’s quality depended upon how the various ingredients were blended together, the site where the ingredients were produced, and the Vratix vrachen that oversaw the blending. As Thyferra was the source of almost all of the bacta in the galaxy while it was produced under the Imperial-backed monopoly of Xucphra and Zaltin, it was also the source of the strongest bacta. Such high-quality product was generally not exported; if it was, it was sold at incredibly high prices. Export-quality bacta was, typically, nowhere near as effective, meaning that more grievous injuries required longer exposure in order to be properly treated and healed.