This is what everyone has been waiting for from E3- at least all of us SWTOR fans anyway. 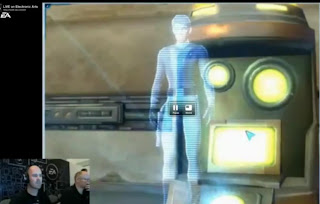 Daniel Erickson hosted a live demo session using a level 26 Bounty Hunter questing on Tatooine from the E3 floor. Those there could experience it live with full graphics. As he was playing, community members were able to ask questions to Stephen Reid via Cover it Live. There is a live stream you can listen to for yourself.
Here are some of the highlights covered in this Q&A session:

As for the number of characters allowed per server, for all of you alt-a-holics, this has not been clearly defined or released yet. It’s understood that you would have enough slots to try each class per server but it’s not really clear yet.

Also, crafting should prove actually beneficial since crafted equipment will be needed to get you into raids that have the best equipment found on the server.

Check out the gameplay Demo below: