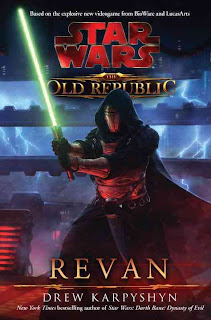 Newsarama has a great interview with Drew Karpyshyn expanding STAR WARS, MASS EFFECT Universes that gives us a little more info about Drew and the behind-the-scene happenings with the stories and how things work.

This nearly 2,000-word interview is very thorough and well worth the time to read it. Drew Karpyshyn has written novels of the Star Wars universe and is now also writing for the upcoming SWTOR MMORPG. He also worked as lead writer on the first Mass Effect, co-lead on the second and was writer of three novels on ME.
So you can see how he would be of interest to fans of either game or series. The interview covers a lot of fun stuff like the challenges or writing inside established worlds, the differences of good and evil, and what is to come for both of these major BioWare properties.
Here is a snippet from the interview:
Nrama: Now indoctrination, that’s something that we touch upon a bit in the games, it’s a major plot point of Mass Effect 3; why was that something that needed to be expanded upon outside the games?
Karpyshyn: Well I think one of the things you want to understand about indoctrination and that I tried to get across in the third book, Retribution, in particular is that it’s more than just mind control, it’s something beyond that. In some ways it’s sort of an evolution into a new existence. It brings with it certain benefits!
Check out the full interview for yourself on their website and let us know what you think.