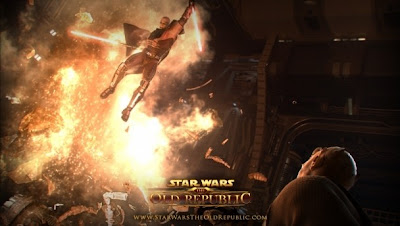 In this article, Leo Stiles of Joe.ie tell us about his hands-on preview of SWTOR. Now that more and more players are getting access to the game, we are hearing a lot of different reviews and previews but it never hurts to get another opinion on the game.

From the moment Leo chose his class as a Bounty Hunter, he got treated to a wonderful cut scene displaying some graphics he can only describe as “remarkable”. If the cartoon style graphics have you on the fence then you should really see them in action as everything flows perfectly together.

According to Leo, the questing is so well done you won’t feel like your simply “gathering” materials or “counting kills” because they are minor parts to the larger story. Fulfilling the quests in the game are so in depth to the story line that they are entertaining and not a level grind; major plus for all MMORPG players out there who are tired of wasting 3 hours collecting a piece of fabric.

The resurrection options are nothing short of what you would expect from a BioWare game and a Star Wars title. You have the option to choose a med droid or to be resurrected in a safe zone. Both have pros and cons so it will be up to the player to determine the best course of action for each encounter. (An aspect of the game we have written about here before.)

Although it is too soon to tell for sure whether the character development will continue on this marvelous track, the first glimpse shows much promise. He seems to think that will all that Star Wars: The Old Republic has to offer fans new and old will love this game from the first time they boot it up. So we call this one another positive review for SWTOR.

Keep in mind that this is only the highlights of the article written by Leo Stiles. You can read the whole thing for yourself at Joe.ie.