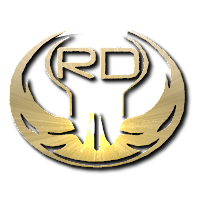 To day we feature the republic guild “Republic Defenders” that focus on PVP and Role playing.

Where did your guilds name come from?
We created that name when we were around 10 years old for other Star Wars games. When we found out about The Old Republic, we decided to continue using a simple name which ended up being The Republic Defenders.

Can you give me a quick 2-3 sentance description of your guild?
We are a Galactic Republic guild focusing on mainly PvP and RP and have no age or class limit. We currently have around 115 members and are one of the oldest guilds in SWTOR. We don’t ask much of our members besides acting mature and being respectful to other players no matter the faction or class.

How did your guild come about?
Well, the main three leaders, Von, Alek, and Xanto, were always huge fans of Star Wars and when we heard of a new MMO RPG coming out called Star Wars: The Old Republic, we immediately got started.

What kind of play style do you focus on? PvE, PvP, RP:
We mainly focus on PvP and RP however we will be joining a RP server in game.

How serious do you play and/or run the guild?
We are pretty laid back when it comes to rules as long as no one acts immature and stays respectful to others. Immaturity is a big thing in our guild and we are heavily against it. However we do enjoy fooling around. There is a difference between joking around and immaturity.

Do you have ranks or a certain hierarchy in your guild?
RD has a ranking system In which promotions are given by the class leader (s). Also, we have guild ranks listed: Guild Master, Vice Guild Master, High Officer, Officer, Member, and Initiate.

Why did you choose the Galactic Republic?
We think being the “good guys” will have a much more interesting and challenging story line. Plus we are huge Jedi fans!

Why do you run a guild?
We are power hungry!!! Mwuahahahaha! Actually we were leaders in other guilds and clans before this and we enjoy helping others in games.

How do you approach Raid Planning?
We are going to approach a raid by having set dps, tanks, and healers and try to have even groups of each different class. We will plan raids ahead of time and those who can make it will make it. All our events are set on our events page.

Are you always open for new recruits or do you want to keep a certain guild size?
In the foreseeable future we will always be open to and welcome new members. Though, we feel we don’t want to pass 250 members because we don’t want to have an oversized guild.

Age Requirement?
We have no age requirement.

What Other Games are you currently playing as a guild?
We aren’t playing any games as a whole guild currently, however some of us play certain games in groups such as Minecraft and LOTRO.

One last question, if there was one thing you could ask the Dev’s to include, what would it be?
We would like Guild Capitol Ships and/or Guild Bases. That would be a great installment to the game.