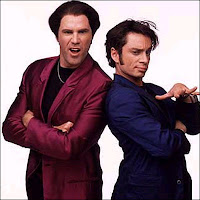 Pop culture references done right in a video game can be loads of fun. If there’s any company who can pull this off the right way, it just might be Bioware. While it’s not completely new news, there is rumor going around that Bioware have snuck a scene from “A Night at the Roxbury” into SWTOR.

There have been some videos going around YouTube that supposedly depict this. It’s a scene from the game in a cantina with some characters who look like they are acting out the SWTOR version of “A Night at the Roxbury” skit. I am pretty sure I completely missed this in the game as I was busy leveling and writing about the game but it’s really cool.

You can judge for yourself from watching the videos but it sure does look like a reference to it to me!

While they said in the past that there would be no pop culture references in the game (ala World of Warcraft style), it looks like maybe they did it anyway. Was it a surprise? A mistake? It wouldn’t be the first time Bioware has done something they said they wouldn’t do. Either way, it’s pretty funny.

Check out the videos and let us know what you think.

Star Wars : The Old Republic releases on December 20th and early play will begin as early as the 13th. See you there!