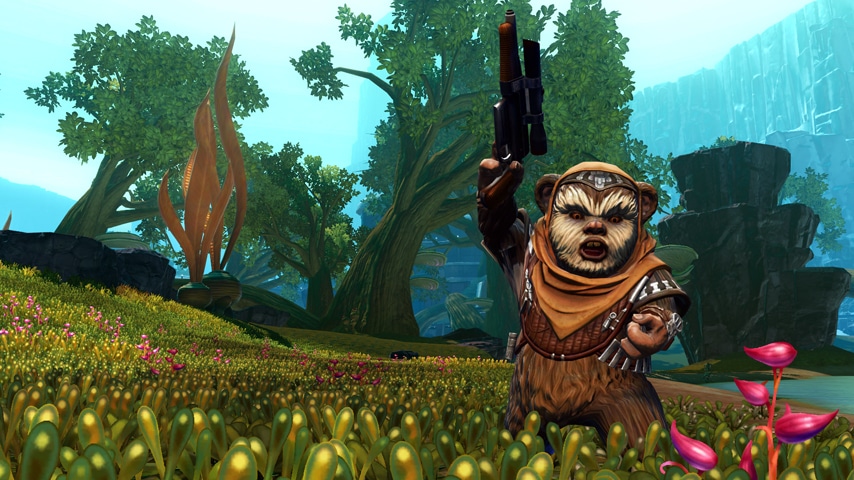 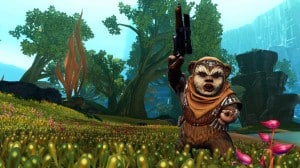 We are super excited about the new SWTOR companion, Treek. We’ve written about her here before and we’re super excited to tell you now how you can get her for yourself! This cute little female Ewok is the companion that everyone wants and lucky for us, BioWare has given us several ways to obtain her.

In this blog post from staff, we learn of the different ways to get Treek companion:

Our first new Companion Character since HK-51, Treek, arrives with Game Update 2.3: Titans of Industry. This mysterious alien mercenary is available for all character classes, and can be earned in-game or purchased directly from the Cartel Market. To help clarify these different options, here is an explanation of the different means to acquire Treek.

All methods begin with acquiring Treek for a single character:

From the Cartel Market:

The first step to gaining Treek is to purchase the Mercenary Contract from the Cartel Market (2100 Cartel Coins). This is a single-use item which will start a quest. Completing this quest will earn that character Treek. In order to complete the quest, you will need to be at least Level 10 as it takes place on the fleet.

Note that both versions of the Mercenary Contract can also be traded on the GTN. The non-Cartel Market version will still require Legacy Level 40 to use, so be sure to check which version you are buying before completing the transaction!

Having acquired Treek via either method, you may now choose to obtain her for other characters on your account.

Once one character on a Legacy has completed the quest and received the Treek Legacy Unlock, any other character on that legacy can purchase the Treek Character Perk for the appropriate faction, which will instantly grant that character Treek as a Companion without needing to complete the quest again. The Character Perk is purchased with in-game credits (300,000) and requires Legacy Level 40 and Character Level 10.

So there you have it- several different ways to get this beloved companion for yourself. What is your preferred method of getting this new companion? Will you buy her from the Cartel Market or with in-game credits or maybe from collections?