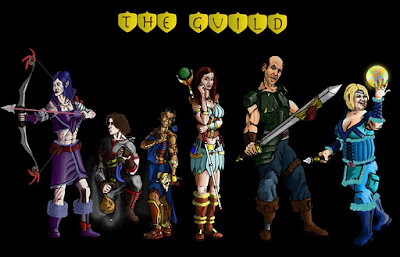 “WHY DIDN’T YOU HEAL THE TANK!” I shook in fear. “WELL?” Caps locks usually didn’t frighten me, but since this was a new game it did. I had no reputation. I was just a nobody.
“Well, the druid was a higher level…and you weren’t going to stay up much lon-”
“-NO. YOU HEAL THE GOD DAMNED TANK. SCREW THE REST OF THE GROUP!” That’s when the druid stepped in.
“NO. We would have been just fine.”“So what you yell at the healer because he decided to do his best to prevent a wipe? Only two people died.”
“What are you his friend?” I had never met the druid before now. “Screw this I’m out of here. Go learn and heal you crappy priest.” The player who had been yelling at me quickly left group. I swallowed hard.
“Don’t worry. You did fine.” I looked in confusion. Though my character could not display my confusion it was felt through the game. “How about we finis this up, and I introduce you to a couple of my guild mates.”
“…Thanks.” That’s how I joined my first world of warcraft guild.

Welcome back to another installment of Intergalactic Intel! I hope everyone’s launch and holiday season has been phenomenal! The next Galactic transmission won’t be out until the new year, but luckily that’s only a few days away!

We’re talking about finding a guild. In previous articles I’ve talked a lot about guilds, but never how to find the right one. So this weeks article is all about finding the best one for you.

The first step is really deciding what you want in a guild. Do you want to PvP? Run flash points? Operations? Make mad credits? What kind of loot system? Does the guild dish out modifications? These are all things you need to know before you go out posting. Make sure when you’re looking at guilds your asking important questions that are meaningful to you.

The next step is one a lot of people overlook. Have a good application. A good application can make or break your entrance into a guild that fits your criterea. I was once told applications should be a bragging contest in which you don’t sound cocky. Sell yourself, but be honest. If you’re applying to a lot of guilds you may want to write up a mock application so you can copy and paste your answers with a few tweaks. If you wanna know what a good application looks like check it out here.

Don’t just spam general chat looking for a guild. Hopping from planet to planet is probably the worst thing you can do. Your best shot is to look at websites like /r/swtor/, sithwarrior.com, and of course the official forums. Most guilds will be posting there to find new recruits.

Talk to everyone who maybe a possible match, in your criteria. Never be afraid of rejection from a guild. Rejection is a natural part of life, so you will experience it online. Remember to keep trying until you find the guild that fits you.

If the guild doesn’t feel right leave. I’ve seen a lot of people stick in guilds they didn’t like. Test the guild out for two weeks. If you don’t like the way things are run, or the atmosphere you can always leave. Explain yourself before you leave, give them a little leeway before you do /gquit. Don’t settle for less. A good guild can make or break the game for you.

Well that’s it for this week! As always may the force be with you!