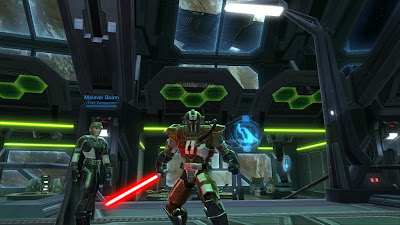 Star Wars: The Old Republic “fastest in history” MMO to 1 million subscribers – or so says Geek.com. I am not surprised in the slightest to hear of these statistics. Even if I wasn’t a personal fan of the game, it’s easy to follow the history of the game to date and see the great popularity of it thus far. It has the makings of an incredible, stat-breaking game or a failure of epic proportions if it lets the gamers down.

So far, it’s leaning towards the former. Sure there are gamers who just aren’t that impressed with SWTOR and that’s ok. To each his own, right? But still, there are millions who are into the game and appreciate it for what it is and what it might be.

Can you believe that SWTOR has 1 million subscribers already? This makes it the fastest MMO to reach this feat. Geek.com explains:

The “fastest growing” number is based on the game’s official launch on December 20th, which ignores the hundreds of thousands of pre-order players who ensured beta access as much as a week in advance of the street date. Still, 1 million players is a number most new MMOs fail to hit at any point in their growth. To BioWare’s credit, the launch has seen few problems. A few long server queues aside, there have been no major events like downtimes, server crashes, or any of the other issues that once plagued major MMO releases.

The fan response to SWTOR has been pretty amazing so far. So will BioWare continue to impress these fans over time? Will they be able to hold onto millions of subscribers as the weeks and months pass? Being the fastest to do something doesn’t always mean that you will be successful with it over time. This is something that BioWare has to persevere and overcome. Do they have what it takes?