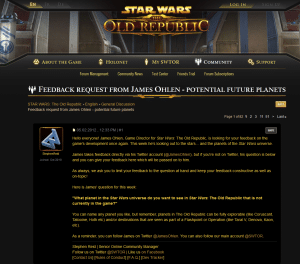 Where is the future of SWTOR going? This is a question that many are asking- both those who love the game and also those who have yet to try it out. You can bet the dev team of BioWare Austin is asking the same question. In fact, they have an entire department dedicated to this sort of thing: future content.

What better way to make a game great than to go to the community and talk with them about what they want? BioWare is on the right track by asking for feedback of the players. This is who they are making the game for and while they cannot please all of the people all of the time, they can make the game a whole lot better for their audience by listening to what the players have to say.

So here’s your chance to speak out about what you want from SWTOR. Do you want to see your favorite Star Wars planet added? Do you want a certain playable race? Here’s a post from Stephen Reid in the official forums about your opportunity to give feedback on future content.

Hello everyone! James Ohlen, Game Director for Star Wars: The Old Republic, is looking for your feedback on the game’s development once again. This week he’s looking out to the stars... and the planets of the Star Wars universe.

James takes feedback directly via his Twitter account (@JamesOhlen), but if you’re not on Twitter, his question is below and you can give your feedback here which will be passed on to him.

Here is James’ question for this week:

“What planet in the Star Wars universe do you want to see in Star Wars: The Old Republic that is not currently in the game?”

You can name any planet you like, but remember, planets in The Old Republic can be fully explorable (like Coruscant, Tatooine, Hoth etc) and/or destinations that are seen as part of a Flashpoint or Operation (like Taral V, Denova, Kaon, etc).