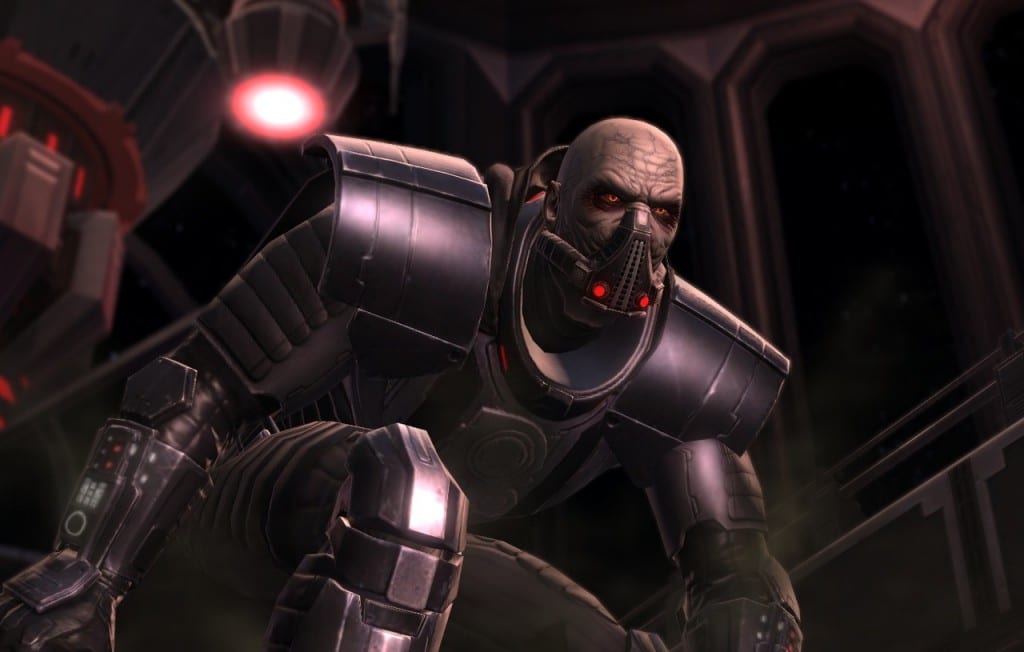 The Battle of Ilum has ended and the threat is gone but a new battle is on the way. You’ve learned of the splinter faction leader’s location aboard the stolen Sith Battlecruiser and your squad must fight your way onto the ship. However, this is not going to be an easy task. The Battlecruiser has an army of battle droids ready to go to any length to defend their leader all in the name of the new Empire.

The environment on the Battlecruiser is a very unstable one where you’ll go up against 6 bosses. It’s recommended that all of your squad members are at least a level 50 because some of these battles are going to be tough.

The first boss is Tregg the Destroyer and he has two MoBs with him. It’s easier to take out the two MoBs if the tank pulls Tregg into the part of the catwalk that’s covered. Once the MoBs have been destroyed, the basic tank and spank battle will take this boss out but do watch out for his powerful knockback. Coupled with this unstable environment, you could be the victim of a killer fall if you’re not careful. Stay in the covered area and away from the edge to lessen your chances of falling.

Tregg also has a Hunters Leap attack that is sent out randomly. This attack won’t do much damage but right afterwards, you’ll need to avoid the boss as he goes into a spinning attack with massive AoE damage.

This one starts out as a simple battle with two droids but a few minutes after the battle begins, one of the droids will turn blue and become invulnerable to your attacks. Even though he will still be putting out ranged attacks, everyone in your group except for the tank needs to concentrate your efforts on the other droid. Your tank should maintain agro on the blue droid to minimize his damage.

Jindo Krey has the standard bounty hunter attacks and abilities. For example, this boss will occasionally latch to and pull a random member of your team towards him with Grapple and stun will incapacitate random players for a short period. The last and deadliest ability is Flame Sweep. This will do the most damage while covering a large area but you can interrupt it.

Since Krey has these standard skills it may seem like an easy kill but it won’t be as simple as you might think. Krey’s ship will fire missiles at you if you get to close and not only do they cause massive amounts of damage but they are hard to avoid even though reticules do appear on the ground before they hit. Have your DPS use the three turrets nearby to fire at the ship and interrupt the missile barrage.

You’ll have to work for the win in this boss fight because it’s not going to be an easy one, especially if you’re not familiar with mechanics. The first ability HK-47 will dish out is the Snipe attack. The boss will target a member of your team randomly, take aim and snipe him. However, if your tank can get his attention before the boss completes the attack, they will take the hit instead of the target. HK will also target random players with his standard missile attack but if you can get out of the way of the blue reticule when it appears at your feet, you can avoid the attack.

Lastly, you’ll have to deal with the uninterrupted burst fire conal AoE attack. This one can do a lot of damage so tanks will depend on the help of the healers to stay alive. Once this boss hits about 50% health, get ready to face the assassination tool belt that gives him the ability to go stealth from time to time. During this attack, he will appear next to a random member long enough to drop a poison grenade on them. It will tick away for a while but eventually kill off the player if not cleansed. You can break him out of stealth mode by using any AoE attack.

Darth Malgus is going to be the toughest boss yet but you can take him down if your team works well together and you’re very careful where you position yourselves. Each member of your team needs to pick up the prototype grenades and equip them to the action bar before you enter the throne room.

Malgus will use Force Leap and Smash the most. Melee DPS should try to avoid Smash when possible and Force Leap usually targets the player farthest away but the tank can get his attention and close the gap.

The first powerful ability that you’re going to encounter with Malgus is the Force Push and it has one heck of a knockback. The stairs is a good place to be with your back to the wall when he uses this attack. Any member of your team that is not in perfect position will be pushed off the edge.

The last ability is Doubt and when a random member of your team is hit with the doubt debuff, within 10 seconds it will incapacitate him for 10 more seconds and it cannot be broken with CC cleanse. Once it has completed its course, everyone else will be forced choked for 15 seconds while the one player faces Malgus alone. The best defense may be to kite him around while waiting on help from teammates.

When the boss’s health drops to about 20%, it’s important to start kiting him up the stairs and as close to the ledge as you can get because once his health reaches 10%, he starts shooting out a stream of force lightening. This attack can only be interrupted using pulse grenades or with knockbacks and Magus will not take any damage once this attack starts. Knockbacks only affect Malgus when he is channeling lightning. Therefore, your team is going to have to coordinate the knockbacks and use them repeatedly to send him over the edge.

If you’re searching for even more excitement, you can take a detour and fight the optional boss Sith Entity. Just go right when you reach the fork in the road instead of going left. It starts out with the standard tank and spank fight but then he’ll break into three separate copies so you’ll have to stun, interrupt and knock back all three of them to win the battle.