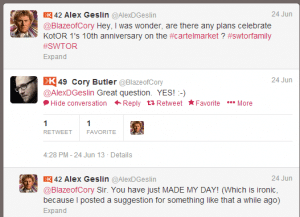 Those who know me know that I love social media, and for good reason, as it connects us in ways that could never be possible before. It’s a great tool for extending your gaming connections as well. And it also helps us remain in contact with our favorite game updates and staff.

Which brings us to a little tidbit from Twitter and Cory Butler this week. A couple of days ago a conversation happened that many might have missed. It’s such a small thing, yet says so much, especially for fans of SWTOR and KotOR.

@AlexDGeslin asked @BlazeofCory Hey, I was wonder, are there any plans celebrate KotOR 1’s 10th anniversary on the #cartelmarket ? #swtorfamily

BioWare Producer Cory Butler answered Alex Geslin’s question on Twitter and this would spark more questions about just what his answer meant and what we might all expect to see from SWTOR for the 10th anniversary.

And that is when we saw this reply:

Really, that’s pretty cool. First it tells us that we might see something awesome in SWTOR for KotOR fans and the other benefit is that it pays to follow the guys (and gals) behind the games you love because  I cannot tell you how many times I have seen something on Twitter or Facebook that I would not have learned about otherwise until way later. It’s fun to feel “in the loop” and it also means you are at a lower risk of missing out on cool things when they happen.

With that said, what do you think they have cooking for this anniversary?