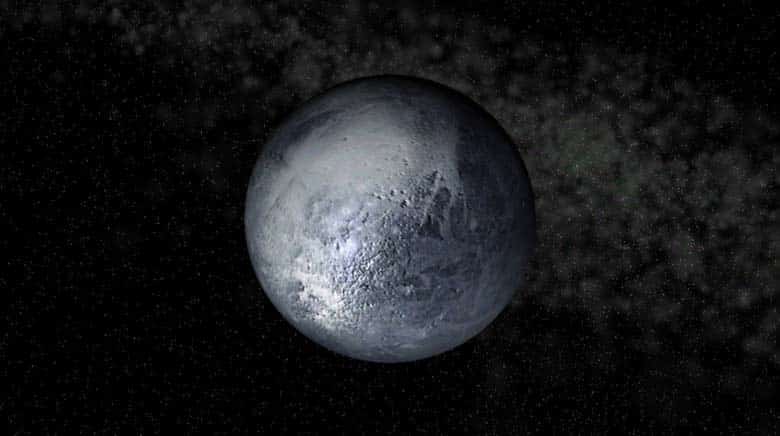 I was so hangover after our company xmas party last week, that I didn’t get a round to post a new space documentary. I really wanted to post a story on the ” New Horizons” mission NASA is doing. The space agency launched the $700 million New Horizons robotic spacecraft from Pad 41 at Cape Canaveral Air Force Station in January 2006 on a flyby mission to study Pluto and its moons. Reaching Pluto required New Horizons to achieve a speed of more than 36,000 mph in an earth and solar escape trajectory, which is the greatest launch speed ever recorded for a man-made object to date. In April 2006, New Horizons flew past Mars, then by Jupiter in February 2007 and Saturn in June 2008. By March 2011, New Horizons passed Uranus and is expected to arrive at Pluto around July 2015.

Being the god of the underworld might not be on top of anyone’s career dreams. But being a celestial orb named after this god may be even worse. That’s the fate of Pluto, a tiny world of ice and rock, once the 9th planet of our solar system – now stripped of its status and remaining a dwarf planet far, far away, circling the sun in a very odd orbit, making a year lasting 248 Earth years.

Since the late 19th century it was suspected that there had to be another planet in our solar system, after the discovery of disturbances in Uranus’ orbit, but it took more than 30 years, till, at last, on February 18th, 1930, Pluto, a dot on a photo plate, was discovered. It was named after the god of the underworld (whose first two letters where, curiously enough, the initials of the man who made it his goal to discover this planet) and became the 9th planet in our system. In 2006, however, the International Astronomical Union (IAU) published a new definition of what a planet had to be like – and Pluto, till then the latest acquisition in our planetary world, met only two of three of the new criteria. And so poor Pluto became the first orb in our solar system that actually LOST the rank of a planet – which made it all the more famous after all.

Celebrate the 83rd anniversary of the discovery of this strange little fellow with a few links:

Pluto is not easy to deal with – read how difficult it is to map it.

This article describes why Pluto is no longer a planet.

And as stated in the beginning of the article, in a few years, Pluto will get a visitor from planet Earth – New Horizons, a NASA spacecraft to explore the planet and the Kuyper belt. Learn about it on the NASA website. Check out this documentory about it below:

But Pluto is not only present in the field of science, but also in the field of fiction, like this article on NBC’s Cosmic Log states. And, last but not least, if you want to have a really special relationship to Pluto – why not name one of his newly discovered moons? (Here they are, on photos, and also in an articlefrom TIME.)