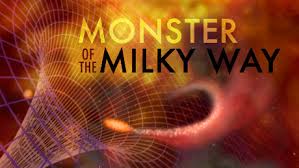 While they are difficult to see for the obvious reason that they give off no light, we now know that they exist because there are circumstances in which they can be located by their effect on other stars. Although it is difficult to to give a precise estimate of the number of black holes that exist because not enough is known about the number of stars that become black holes, astronmers estimate that there is about one black hole for every 10,000 stars, which means that the Milky Way contains at least 100 million black holes. At the very center of the galaxy lurks the darth-vader rock star, the supermassive black hole, Sagittarius A aka Sgr A*.

Looming beyond the horizon of Sgr A*, if we assume Einstein’s theory of relativity that predicts what happens when a star collapses is correct, is a singularity. But it is a singularity that lies in the future rather than in the past, much like the Big Bang, only in reverse. 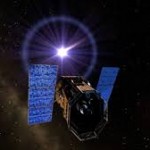 For the first time, NASA’s Chandra Observatory has resolved the complex structures at the center of our Milky Way galaxy dominated by Sagittarius A through X-ray observations. Chandra astronomers reported that In addition to the supermassive black hole, Sgr A*, they have found the remains of a supernova that exploded some 10,000 years ago. The proximity of the supernova known as Sgr A East to the black hole in the galactic center suggests that the explosion may have prevented material from falling into the black hole, thus “starving” the supermassive black hole for a period of time.

This Chandra image of Sagittarius A* or Sgr A*, was made from the longest X-ray exposure of that region to date. In addition to Sgr A* more than two thousand other X-ray sources were detected in the region, making this one of the richest fields ever observed. 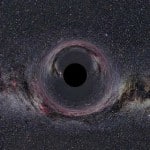 During a two-week observation period, Sgr A* flared up in X-ray intensity half a dozen or more times. The cause of these outbursts is not understood, but the rapidity with which they rise and fall indicates that they are occurring near the event horizon, or point of no return, around the black hole. Even during the flares the intensity of the X-ray emission from the vicinity of the black hole is relatively weak. This suggests that Sgr A*, weighing in at 3 million times the mass of the Sun, is a starved black hole, possibly because explosive events in the past have cleared much of the gas from around it.

Evidence for such explosions was revealed in the image – huge lobes of 20 million-degree Centigrade gas (the red loops in the image at approximately the 2 o’clock and 7 o’clock positions) that extend over dozens of light years on either side of the black hole. They indicate that enormous explosions occurred several times over the last ten thousand years. 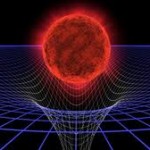 Further analysis of the Sgr A* image is expected to give astronomers a much better understanding of how the Sgr* grows and how it interacts with its environment. This knowledge will also help to understand the origin and evolution of even larger supermassive black holes found in the centers of other galaxies.

Black holes are already well understood, we think, but we’ve only ever observed them at second hand – the behavior of orbiting objects or bent light rays. To actually view the shadow of a black hole, the cut-off point where light is swallowed and cannot escape, would be a massive advance – and only the beginning.

Detailed observation of the area around the Sag A* border would be a goldmine of information. The spin and rate of matter inflow into the central black hole will tell us about the Milky Way’s creation, as well as providing further extreme tests of general relativity. We could even see frame dragging, which sounds like a video game hardware issue but is actually something that could happen to reality – where a spinning black hole grabs hold of space and literally pulls reality around after it.