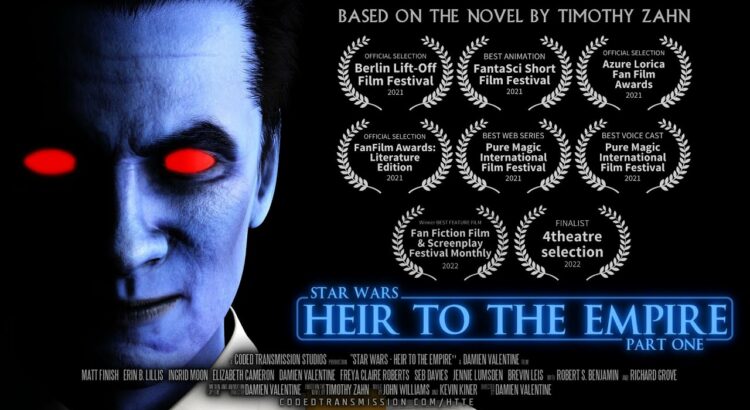 A new special edition of Star Wars: Heir to the Empire is now live on youtube. Below this article you can see a 150 min fan animation of chapter one.

““Star Wars: Heir to the Empire” is a science fiction novel written by Timothy Zahn and published in 1991. It is set in the Star Wars universe, five years after the events of the 1983 film “Return of the Jedi.” The story follows a group of characters including smuggler and rebel hero Han Solo, his wife Princess Leia, and former Jedi Knight Luke Skywalker as they try to defend the New Republic from the remnants of the Empire.

The novel begins with the introduction of Grand Admiral Thrawn, the main antagonist of the story. Thrawn is a brilliant military strategist who has risen to power within the ranks of the Empire after the death of Emperor Palpatine in “Return of the Jedi.” Thrawn is determined to restore the Empire to its former glory and will stop at nothing to achieve his goals.

Meanwhile, Han Solo and Princess Leia are now married and expecting their first child. They are also leading the fight against the remnants of the Empire as members of the New Republic. Luke Skywalker, now a fully trained Jedi Knight, is also working to protect the New Republic, but he is struggling with the demands of his role and the temptation of the dark side.

As Thrawn launches a series of attacks against the New Republic, Han, Leia, and Luke must work together to defend their cause and stop the Empire from regaining power. Along the way, they are joined by a diverse group of allies, including Lando Calrissian, Mara Jade, and the Noghri, a race of alien warriors.

As the story unfolds, the heroes face numerous challenges and setbacks, including the betrayal of one of their own and the capture of Han Solo by the Empire. However, they remain determined to defeat Thrawn and restore peace to the galaxy.

Ultimately, the heroes are able to outmaneuver Thrawn and his forces, thanks in part to the help of Mara Jade, who has turned against the Empire and defects to the side of the New Republic. In the end, Thrawn is defeated and the Empire is once again defeated, bringing an end to the conflict and allowing the New Republic to flourish.

““Star Wars: Heir to the Empire” is a thrilling addition to the Star Wars franchise, filled with action, adventure, and complex characters. It is a must-read for fans of the series and for anyone interested in science fiction. The novel’s success spawned two more books in the “Thrawn trilogy,” as well as numerous other novels, comic books, and video games set in the Star Wars universe. It is a testament to the enduring appeal of the Star Wars franchise and the enduring popularity of Timothy Zahn’s storytelling.