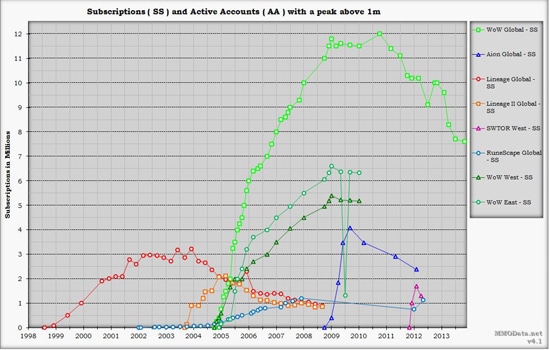 MMO subscription number tracking is a challenging venture. Most developers are extremely careful when crafting public releases relating to how many subscribers their game currently has. For better or worse, these values are considered to be a measure of success (or failure) of our beloved games and tend to offer insights on subscriber trends. Typically one would read announcements about player base increases in official websites or fansites, while occasionally quarterly reports would indicate decreases somewhere in the fine print. Some recent examples include World of Warcraft‘s increase to 7.4 Million subscribers  and SWToR’s announcement of having 1 Million subscribers since changing to the free-to-play subscription model.

Some of the MMO subscription data MMOData.net used to offer

At the same time, some community websites have attempted to track subscription numbers and offer clarity on the health of various MMOs. The most recent example is MMOdata.net that was probably one of the best community efforts out there. Even though the site stopped updating its numbers about a year ago, it remains online and offers a great deal of information up to 2013. The reason behind the lack of updates as you might have guesses is the lack of information availability from the developers about their games. 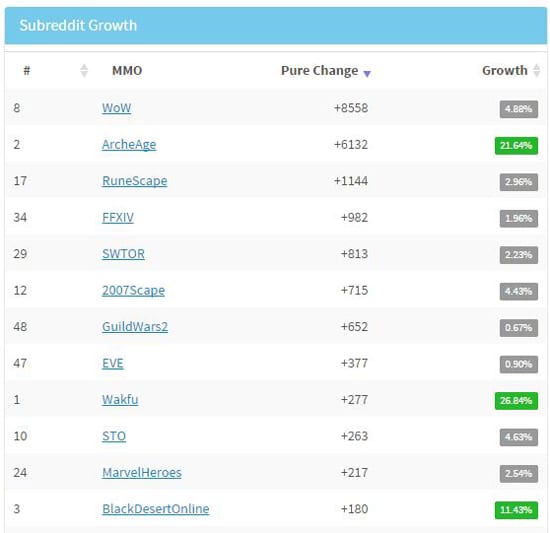 Pure Subreddit change according to RedMMO

Another example that doesn’t fall under the traditional subscription number tracking but Subreddit activity is RedMMO. The site, tracks growth and activity in popular MMO subreddits and posts data. In specific, it breaks down its data by looking at the following elements:

While the creator of the website claims that it only took a few hours to put RedMMO together, it’s certainly a very commendable effort. One can certainly see the increases in activity due to a new expansion announcement or some other significant event relating to an MMO.

A snapshot of RedMMO data for SWToR

According to the data listed, SWToR is currently in 7th place behind ElderScrolls Online while World of Warcraft remains the most popular subreddit. SWToR’s subreddit has also seen a 75% increase in subscriber activity and subscriber health is also up by 2.27%. One can certainly infer that these increases are closely related to the announcement of the Revan expansion. There are a lot more details in RedMMO that you can dig into and draw your own conclusions depending on how your read these numbers.

Whether subreddit subscriber growth and activity correlates to actual MMO activity remains to be seen. While it’s tempting to assume that Reddit captures that pulse of the community, only very few people can validate that assumption with actual subscription data. Nevertheless, RedMMO offers great insight in one of the more popular websites in the web and MMO activity.