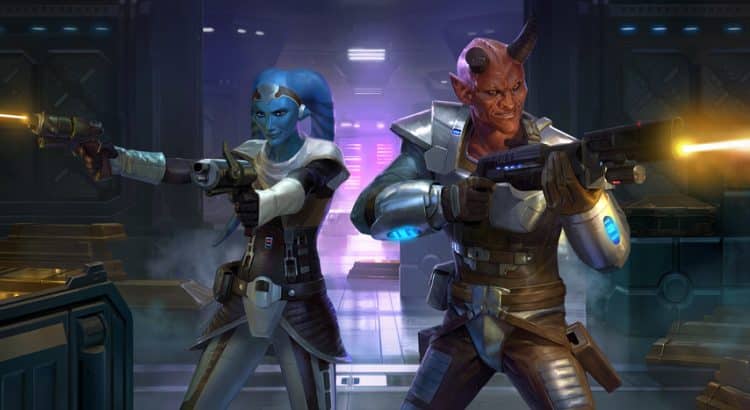 The SWTOR Team over at BioWare  has just released a new teaser trailer of the upcoming Chapter, Plunder and Profit coming on May 5th:

BioWare™ and Lucasfilm today announced the next chapter in the episodic storyline of Star Wars™: The Old Republic™ – Knights of the Fallen Empire. The Profit and Plunder chapter will be available on May 5 along with a new multi-level Eternal Championship challenge that requires increasingly more courage and skill as you progress.

The newest chapter in Knights of the Fallen Empire gives the Outlander an opportunity to turn the tides against the Eternal Empire in a clandestine heist to plunder Arcann’s secret treasury. In a high-risk mission to recover the Eternal Empire’s vast riches, players will partner with the galaxy’s most infamous thieves: the suave Bounty Hunter, Gault Rennow, and the female Twi’lek pirate, Vette. Prepare to risk everything as you embark on a covert mission against all odds to take back the Empire’s stolen wealth!

Players of Star Wars: The Old Republic can join and play Knights of the Fallen Empire beginning with Chapter 1 through the current chapter, Visions in the Dark, for free* as a Subscriber. Plus, as part of the Subscriber Rewards Program, players subscribed by May 1 will also receive a special HK-55-themed Ship Droid Companion customization reward.**

In the new Eternal Championship challenge, players brave enough to enter will face the most notorious and skilled warriors Zakuul has to offer with the chance to earn exciting rewards. Those who conquer all ten bosses gain the ultimate opportunity to convince the Wookiee gladiator and fan-favorite Companion, Bowdaar, to join their Alliance.

Turn the tide against the Eternal Empire in ‘Profit and Plunder,’ coming May 5th in the episodic story, STAR WARS™: The Old Republic™ – Knights of the Fallen Empire. Prepare to lead a clandestine strike to plunder the Emperor’s secret treasury.

If you’re going to cripple Arcann’s military machine, you’ll need to partner with the galaxy’s greatest duo of thieves: Gault and Vette. It will take all your courage and wits as you lead your team to take back the vault’s vast riches, seized from the Eternal Empire’s conquered subjects.

With time and resources running short, can you beat the odds?
Knights of the Fallen Empire, including ‘Profit and Plunder’ is free to all Subscribers and new players can jump right into the story with a new Level 60 character. Plus, subscribe by May 1st to get Early Access and the stylish new HK-55 Customization for your fearless Ship Droids!