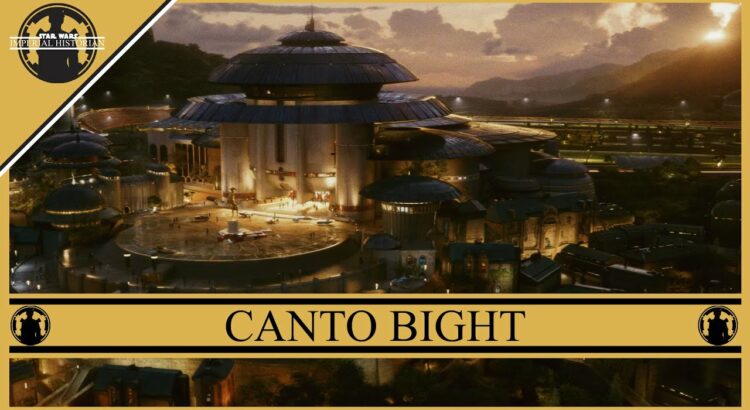 Star Wars is a space opera media franchise. Currently, it includes 12 feature films – 9 films from the Skywalker Saga, 2 story films, and one animated film. The franchise also includes numerous games, books, comics, attractions, and much more, made in the form of a single fantasy universe.

The universe was conceived by director George Lucas in the 1970s. Since its inception, the fantasy world has been dramatically expanded. Disney currently owns the franchise.

Star Wars is now second in terms of total box office receipts. They are second only to the Marvel Cinematic Universe.

The created universe includes a whole fantasy world. One of the most exciting places in the universe is the city of Canto Bight. Today we would like to talk about what it is like and what is so entertaining and noteworthy.

What is Canto Bight

Kingpin Shoklop calls Canto Bight, the playground for the most adorable creatures in the galaxy. At Canto Bight you’ll see many varieties of species playing amusing table games with high stakes and father races with big money. Canto Bight is also well-known for the largest artificial ocean in the entire galaxy and the most delicious food in the universe.

The city of Canto Bight was first seen in The Last Jedi. It is the most popular tourist and gambling destination in the Star Wars universe.

Introducing this city into the plot made it possible to add new characters and diversify the picture shown to the audience.

Filmmaker Rian Johnson notes that Canto Bight is very different from other locations in past films in the franchise. He adds that the casino city is a kind of Monte Carlo, but only in space.

How the Location Was Created

The new location was not just part of the imagination of writers and directors. The film’s developers drew inspiration from the famous city of Dubrovnik, which is located in Croatia. Dubrovnik is one of the most famous tourist cities in Europe. In 1979, it was even included in the UNESCO World Heritage Site.

If you go into details, Canto Bight is similar to his prototype. Like Dubrovnik, the space city is located on the coast. Instead of ordinary water, there is a whole artificial ocean, the largest in the entire galaxy.

What is Canto Bight Famous for?

The city’s main sight is the center of gambling entertainment in the entire galaxy. Creatures from all over the universe come here to visit the numerous gaming halls and place bets on the race tracks.

The city has the same reputation in the galaxy as the earthly Las Vegas and Macau – it is the most respected place for gambling. It is interesting that the casino, in one way or another, appeared in all the films of the Star Wars universe. In The Last Jedi, the scriptwriters paid sufficient attention to this direction and comprehensively presented the casino.

In the Last Jedi, the gambling town of Canto Bight is not explored in great detail. But on the other hand, 4 books were immediately released on this topic, which received the same name. The Canto Bight books are a series of novels in which the action takes place on the territory of the city of gambling.

What Games are Available at Canto Bight Casino

The main feature of the casino is an extensive list of available gambling games. Much of the entertainment here resembles games that exist in reality. At the same time, as in any other casino, here you can also find quite interesting options, for example, floating slots.

An interesting detail is that so that no one can interfere with the work of floating slots and steal the winnings, special protection is provided from a quantum-layered shell.

The film The Last Jedi and the introduction to the history of the Canto Bight casino divided the camp of fans of the franchise into two parts. Some point out that the direction of the Star Wars films changed dramatically in this part. They also insist that the introduction of the casino was inappropriate, and this scene is in stark contrast to the rest of the movie.

Other fans, on the contrary, appreciated this decision of the director. In their opinion, Canto Bight has become a breath of fresh air for the franchise, like the casino in the James Bond films. Only one thing does not suit the fans – that the topic of the casino was revealed too superficially.

More Things to Do in Canto Bight

There are several other exciting locations in Canto Bight. One of them is the Old Town on Cantonica. In this part, the casino is located, and luxury stores offer a wide range of rare and unique goods.

You can also find several cafes, eateries, and pastry shops in the old town. Immediately on the hill, on a mountain, is the central police department. Local cops can watch what is happening in the city from the window.

Not to mention the local hippodrome. This is a vast and majestic building in which animal races are held. The hippodrome is located in the Old City and borders the Kanto Casino.