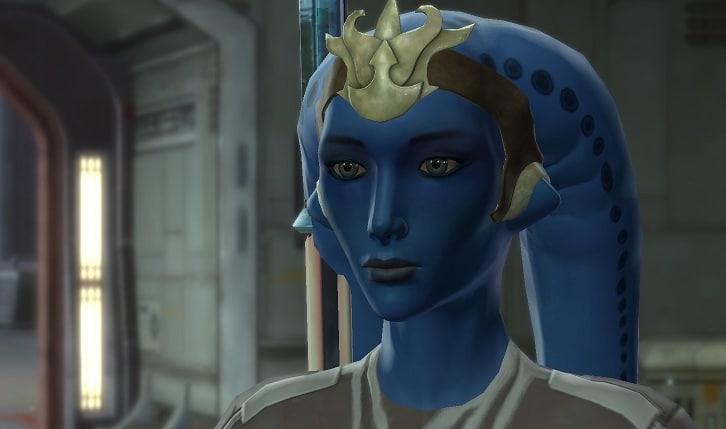 This is a sensitive topic for many people and I can respect that. However, as a female gamer, I find it really important to address this issue. Is there still an issue in gaming today, and in our SWTOR community, with female players being harassed?

I have heard stories of people quitting SWTOR due to the harassment or abuse they have suffered due to their gender, or perceived gender in the game. As always when I hear this kind of story I am angry and also sad. That being said, I’m not 100% convinced there is a real issue of sexism in the SWTOR community.

Here is a common scenario:

Person is playing a female toon. Perhaps a sexy Twi’lek in skimpy attire because that seems to be the norm for the female versions of characters in most video games these days.

Person encounters other players, presumably male, who then go on to harass said player for being female.

This ‘harassment’ can include anything from unwanted sexual advances, pressure to reveal real name and location, age or physical identifiable details about oneself, pressure to use voice chat and even physically “humping” or “grinding” the character with their character.

Oftentimes, if these unwanted advances are turned down, the player will then get harassed in a new way- called profane names and insulted and attacked verbally and in chat. Sometimes these attackers will get their friends to harass the player, or they will follow you around the map, making you unable to play enjoyably, if at all. A popular tactic is to call you a “whore” or a “b*tch”.

For some, this is not an incident that happens once or even twice, but one that can occur every time they play. For others, however, the problem seems nonexistent. Many men admit to playing female toons and never being propositioned or harassed. Then again, there have been males to come forward and admit it happens to them when they play female characters.

No one should be exposed to this type of sexual harassment when playing a video game- whether from males or females. No one should feel ran off from a game due to this type of behavior by others. However, the problem still exists, which means in order to fix it, we need to talk about it.

First, is this problem exclusive to SWTOR? Absolutely not! In fact, I’d be willing to bet it’s less common in SWTOR than many other games. For example, I play first person shooters, where the environment is typically quite unfriendly to female gamers. That being said, just because it’s more common in certain types of games than others does not mean it is EVER ok.

What To Do if You Are Harassed in SWTOR:

With that in mind, let’s go ahead and take a look at what you should do if you encounter this type of harassment in SWTOR:

Report the player for harassment. Right-click on their name in chat, and look for the report option. Then select the appropriate type of harassment.

If you are a male playing a female character and this happens to you, don’t just laugh it off or troll them back. Report them. If you don’t, they will keep doing it and next time it will be someone’s daughter or sister. If you see your buddies doing this type of juvenile harassment, tell them to knock it off and that’s it not wanted in SWTOR (or any game).

We have to be the change we want to see in the world, including our video game world. While this problem is not unique to SWTOR or even to MMORPGs, it is one we can do something about, at least in our communities, if not anywhere else.

Keep in mind that just because it has not happened to you doesn’t mean it hasn’t happened. Remember also that just because it “isn’t as bad” as the community in another game does not mean it has a place here or that it should be overlooked and ignored.
Speak up and speak out against sexism and sexual harassment in your video games and we may one day finally see an end to the days when men and women could not be treated equally in a video game.