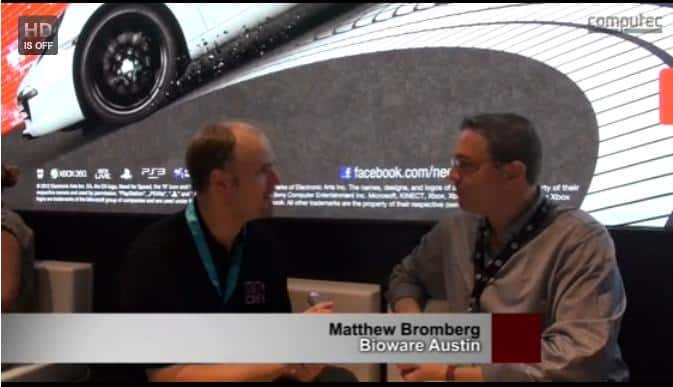 German Gaming site  gamesaktuell.de has an interesting interview with Matthew Broomberg General Manager at BioWare Austin. Here is the highlights:

First answer to question some people love it, some people hate it, what do you think of F2P… answer, read straight from the PR briefing “It brings new players, I don’t think that’s a bad thing””. Fluff….
3:05 “F2P is not as big a deal as people make it” A lot of people make too much of the business model change.

Question “no free-to-play did it withing 9-11 months”. answer “you should be innovative and aggresive”. “the game is lightyears on from where it was at launch.” They want to bring players “back”“.
Some waffle about Warhammer Online.

~6:00 “pay-to-win”? “We would never want to do anything to harm the game, obviously” “vanity, convenience, that’s easy”
“save time, new players, speed up levelling” “that’s a long way-a-way form play-to-win, we would never do that”….
“”more engaged players” = people paying for extra coins and subscribers

~9 minutes question “people at a subscription level expect content at monthly at best” “was it noticed too late…or really don’t need it”. answer “there’s a little bit of misconception about that, we’ve spent a lot of time updating the elements of the game that weren’t necessarily content related””. “now that we’ve go the core … updates… now we’re going to focus almost completely on content related updates”“.

~10:00 “in february and march there wasn’t coming anything, was the time frame… “” “it’s too long, I completely agree with you” “we didn’t update the game fast enough, we should’ve done more””.
~the rate of content frequency will suffer [due to staff on f2p] – “content strike teams are different from the F2P implementation team” i.e. It’s not the same people so we shouldn’t worry (cough)….

~12:30 “solo content V team content” “for hte immediate future in the next few months, we’re focussed on group content not solo content” “strategically important””. “”we also have plans to increase level cap and provide more solo content””. blah blah blah…. “on an ongoing basis, multiplayer is really where our future is”.

~15:00 “Very expensive to do deep, voiced content” that kind of content has to happen a little more “episodically” “It’s just not humanly possible to do that sort of content every 3-4 weeks”.

A good interview honestly. He seems to be moving the game from waiting months for content to every few weeks we get bits like a new Warzone, or a new Flashpoint/Operation. Then at longer intervals like every six months to a year we get new story episodes, probably in the form of expansions. Honestly that is a good way to do it. Like he said to have new story content every month is impossible for any studio to do.