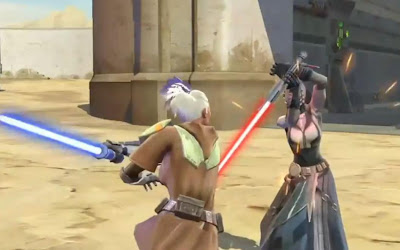 Youtuber logun24x7 has created a awesome compilation video of all the combat animations we have seen in Star Wars: The old republic so far. It’s interesting to see how the animations have developed over the last few years – as Logun also points out:

We often see people criticize the animations in SWTOR and true, some of the earlier animation still needed work however I think we have seen a continued improvement over the last year’n a half. What seems to fly under the radar is the sheer amount of animations in this game.

Never mind the cinematics, and just looking at the combat Bioware has shown we have seen a huge number of animations, and I mean real animations not just a reused generic sword swings with a different colored particle effect attached.

For my own amusement I pieced together every combat animation I could find into one video. Most of you likely have seen the majority of these but I was surprised by a few I didn’t notice before I started this project.