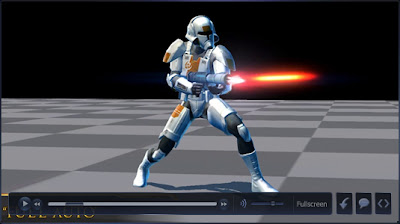 Today’s Friday updates features a Studio Insider on combat animation and details too Bioware’s plans for the Eurogamer Expo next week.

In the Studio Inside, Principal Lead Animator Mark How, goes through the process of creating combat animations, from the idea stage to a finished product. The Studio insider also features Q and A were a number of community questions is being answered. The most interesting news we get here is that Dual Speccing is something BioWare wan’t to add soon after the launch of the game.

Q: Since it has been clearly stated that there will not be dual specs for characters in the game, can you explain your philosophy behind the skill trees and how you are taking into account players that want to be able to play PvP and PvE content on the same character? – illumineart
A: Dual Speccing is something we want to add soon after launch. Also, features like Guard, PvP Taunt, Resolve, etc. work to narrow the gap between PvP and PvE specialized skills (i.e. a +Block skill would be helpful in both PvE and PvP).

A few other noteworthy selections from the Q&A:

Q: Will there be any kind of arena system? If so, which brackets will it support? – InquiescentA: ‘Arena System’ has come to mean two different things depending on the context: Single Elimination PvP game mode and Ranking/Tournament Systems. Whether or not we add that game mode to The Old Republic’s current lineup (domination, assault and bombing run) is TBD. However, one of the top things on our list for post launch is a rated Warzone system where players can form teams, earn team ratings, earn individual ratings, as well as participate in tournaments, etc.
Q: Are there any plans for non-combat forms of PvP, such as Pazaak or Swoop Racing? – RizzoRatchetA: We are considering, testing and/or developing several things like that. We’ll let you know as soon as we are sure about what we’re going to add.
Q: Are there rewards for PvP, such as Titles, Badges, Grades, etc.? – XenthorA: Yes. Players will earn currency for PvP Gear, Valor Ranks, titles and other privileges through PvP accomplishments, such as winning Warzone matches, claiming Open World PvP objectives, finding hidden caches in PvP areas, etc.

Also up on the front page are the details regarding The Old Republics upcoming appearance at Eurogamer Expo which takes place September 22nd to the 25th in London England. A meet and greet and Developer Q&A will be held on Saturday the 24th from 8pm to 12am at Gamerbase London for those attending the show.

Held each year at the Earls Court Exhibition Center in London, the Eurogamer Expo stands as one of the largest video game events in the United Kingdom. This year BioWare and LucasArts will be bringing Star Wars™: The Old Republic™ to the show, letting gamers get their hands on Origin World content for each of the eight classes in the game, as well as some Player-vs-Player combat in both the Alderaan and Huttball Warzones!

The Eurogamer Expo runs from September 22nd through the 25th, with show floor hours from 11:00 AM GMT until 7:00 PM GMT. For those of you who are early entry ticket holders, the show opens an hour earlier at 10:00 AM GMT.

On Saturday, September 24th from 8:00PM until 12:00AM GMT, BioWare will be hosting a Community Meet and Greet at Gamerbase London inside the Trocadero Centre. Those who attend will be able to meet other members of The Old Republic community, have a couple of drinks with the BioWare team, and take part in a developer Q&A session.