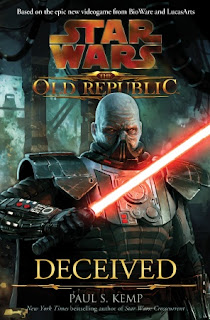 Deceived tells the tale of Darth Malgus, a fierce Sith Lord who lived during the time of the Great Galactic War as he deals with the coming peace treaty between the Empire and Republic, his Sith “allies”, and his own conflicted feelings on the events transpiring.

Deceived is a novel that does its job perfectly; being a tie-in to a huge upcoming game (Star Wars: The Old Republic, of course) it had to be not only a separate story that could stand on its own two feet, but a novel that ties in with the events of the SWTOR so that it makes the readers curious about the game itself. Luckily, it does just that, dragging you into the universe the game takes place in while making you curious enough to check out more.
Deceived introduces us to the situation of the galaxy and the important characters making an impact on events, most notably Darth Malgus, the Sith seen leading the attack on the Jedi Temple on Coruscant in the “Deceived” trailer for SWTOR (I see what you guys did there!). They really do a fantastic job of fleshing out his character in this novel; it’s probably the best part of the whole thing. No, he’s not just a mindless Sith who goes around with his lightsaber screaming, “BLARGH I’M GOING TO KILL ALL JEDI BECAUSE I’M EVIL! SUCK IT LIGHT SIDERS!” He’s actually a very “human” Sith – sure, he’s certainly filled with anger, hate, rage, and all those dark emotions, but there’s more to him than just that. We witness his battle with his own feelings on certain things – certain things I won’t elaborate on in this review due to not wanting to spoil you on a book that’s not even out already – and it’s always a very realistic emotional conflict. It’s because of this that he serves as both a protagonist and antagonist during the course of the novel, something that’s difficult to pull off really well sometimes, but Paul Kemp – author of Deceived – managed to do just that. 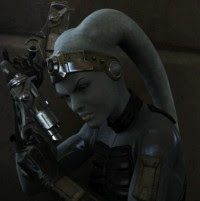 The other characters are also fairly rich in development, each having their own endearing personalities, making you care for pretty much all of them. We’ve got each type of character that should be represented in a TOR tie-in here: A Sith, Jedi, smuggler (with a heart of gold, of course), slave/badass Twi’lek, etc. Kemp even threw in a Mandalorian for good measure! Though this character doesn’t have any real importance to the story at all, but with Deceived being what it is, they had to get that Mando in there somehow (of course, you’ll understand exactly why that is once you read the novel, but you’ll not get me to elaborate any further – no, not even for money!…. Okay, maybe for money). The Jedi, Aryn Leneer, is probably my least favorite of the bunch; it’s not that I hate her, it’s just that she can be a slightly bland character at times (and of course, with a side of major angst to boot). Ah, yes. No Star Wars main character can come without that sweet, sweet angst.
I’d argue, however, that Kemp’s strength lays in getting inside a character’s head rather than writing actual dialogue. No, the words being spoken by characters are often very good; that’s not what I mean. What I’m getting at is how he actually writes it. This was a problem I noticed in Crosscurrent, Kemp’s first Star Wars novel – even if that was a fantastic novel, the dialogue often stuck out to me as being choppy and rushed, an issue that was definitely noticeable in Deceived, as well. He consistently resorts to simply, “he said”, “she said”, “they said” etc. This is an issue because after awhile, no matter how great the words spoken by characters may be, it gets a tad boring. You need to change verbs, Kemp. Don’t be afraid to add in the occasional, “whispered”, “shouted”, “spat” or whatever else, because those are all much more exciting than the constant usage of “said” and similar words.
Moving on, one of the really great things about the novel is the era it takes place in, offering a truly fascinating setting. Most notably on this subject we get references to those drool-worthy cinematic trailers for The Old Republic we were treated to awhile back – those are explained in full, even going a bit farther than just simple explaining. Like I mentioned before, it’s a great set up for the actual game; if I was completely new to the Star Wars universe and picked this up just because of…. I don’t know, the neat cover, I would absolutely not be lost at all. It requires no prior knowledge of the EU to get what’s going on, and it makes you curious about the events of the coming game – exactly what Paul Kemp was going for when he wrote this book.
Then ending was also very good, wrapping up plot lines in a satisfactory matter and leaving open the ones that should be left open for future use. We do need stories for the game, of course. Unfortunately, the one “surprise” at the ending I found a tad predictable – or at the very least, I found it inevitable. While I had considered many options that could have ended this one certain plot during the course of my read through, the one that did end up happening had entered my mind as a possibility more than a few times before it transpired, making me wish that Kemp had instead thrown a total curve ball at the readers rather than something that was fairly predictable. It even made certain things that happened right before it sort of inconsistent – the ending contradicted itself, dang it! I understand why these two events I’m referencing happened – they both worked very well on their own – but together, in the same novel working off of each other, it made little sense.
Despite that, however, Deceived is a great novel to read if you’re at all interested in the Old Republic era, or if you want something to check out before Star Wars: The Old Republic is released since this is so closely related to the events of the video game. It can serve as its own separate story, but at the same time, it gives some fantastic background to the plot of the game. It’s not a spectacular novel – I’ve read many other SW novels that were more memorable than this one – but for what purpose it’s trying to serve, it does its job well. Being the incredibly short book that it is, Deceived is a nice read if you want to just breeze through something quickly.
Advanced Reader Copy courtesy of Del Rey
The book will be available at retailers on March 22nd. Pre-order your copy right now at the following online retailers: Amazon, and other retailers.