Thanks to The Movie Internet Database (aka IMDB) – the greatest source of film industry information available to hacks like me – we now have some idea of exactly who is lined up to play the voices in Star Wars: The old Republic 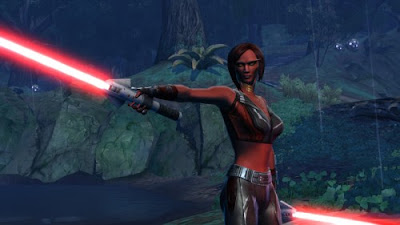 Employing all of my powers of deduction and film knowledge, I’ve picked out Joseph Gatt as the most recognisable face on the list, since I’ve just seen him blued up and frozen as a Frost Giant in Kenneth Branagh’s spectacular Thor adaptation. But there are some more recognisable talents here, even if you don’t know the names or the faces: names like Jennifer Hale, who is a demi-God of the voice-work universe, and who has also already worked on a number of Star Wars videogame properties including Knights of the Old Republic.
Michelle Bonilla does the voices of Huttese Alien / Nautolan Alien / Ortolan Alien / Various. You may know Michelle from “Saving Grace” or “All My Children” but what you might not know is that she also did the voice of White Legs in Fallout: New Vegas.

Alex Fernandez does a variety of voices in SWTOR and is known for his roles in “Criminal Minds” and “Desperate Housewives”. He also did voices for Call of Duty: Black Ops and SOCOM 4: U.S. Navy Seals plus a host of other video games.

Jennifer Hale is no stranger to video game voicing. She was in Mass Effect 2, God of War: Ghost of Sparta, Spider-Man: Shattered Dimensions, Marvel vs. Capcom 3: Fate of Two Worlds, Clash of the Titans and more. She was also in the Star Wars: The Clone Wars TV series. And she’s doing voicing for Mass Effect 3 as well.

Then there’s Juliet Landau (daughter of Martin, and far more attractive), who memorably “went English” as the Nancy to Spike’s Sid in Buffy The Vampire Slayer (and later Angel of course), and the Twilight saga’s Tinsel Korey.

So, not exactly a stellar cast, but it is nice to see that there are some geeky picks in amongst the voice actors, as well as some familiar voices from other Star Wars projects to dial up the credentials and give militantly observant fans something to crow about.
Have a look at the list for yourself. Not many roles are mapped out clearly yet, but it seems odd that someone has gone out of their way to name every single one of Alex Fernandez’s roles. There is a serious amount of pleasure to be had in going through all the names and recognising them for minor speaking roles in videogames and cartoons, trust me.

Do you see any names you recognize? They have a great voice lineup here, for sure!
See the full voice cast of SWTOR at IMDB.