If you are a regular reader of this blog, you know how much we love Lars Von Trier   OneMinuteGalactica. Back in December last year, we did a short interview with the guy, and we have been following his productions ever since. 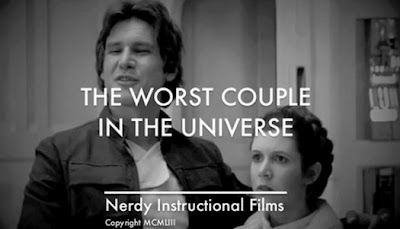 At this years Cannes film festival Last week we got to see OMG’s latest movie: “Melancholia antichrist” “The Worst Couple in the Universe“. At the following press conference  he was good enough to answer questions about his view on Adolf Hitler about the movie and upcoming projects. Check it out below the movie

How did you get the idea for this film?
Well..This one is going to be my last Nerdy Instructional Film, and I wanted to end the series with another Star Wars video, to sort of make bookends. Because I had started the instructional films with a dating video starring Luke and Leia, I figured it would be nice to go full circle and end it with a video about marriage, this time with Leia and Han. I found an educational movie from 1954 called “Who’s Right?” and was happy to find that the narration would fit pretty well, so I did my best to make it funny.

How long did it take to make?
It probably took me about 6 to 8 hours to put it together.

What software are you using for this?
The software is just plain old iMovie. It’s not great for special effects, but I don’t know how to do that anyway, so iMovie works pretty well for me.

Got any new videos in the making?
My next video will probably be a commercial parody for a prescription medication taken by movie heroes. You know how they sometimes turn temporarily evil in the middle of a movie? This drug gets them back into hero mode, with plenty of side effects. And of course I’ve got another Star Wars idea, too.