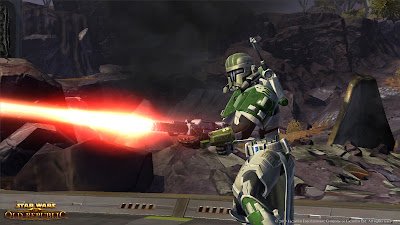 It’s Friday once again and that means that it’s time for another BioWare update for Star Wars: The Old Republic. This week brings a trio of updates starting with a new video from the recent Fan Site Summit held at BioWare’s Austin, TX studio in April. The video reflects on the event and what attendees thought of their hands on time with SWTOR.

It’s nice to see BioWare developing a nice, cozy, friendly relationship with the people that will be objectively reviewing their product.


Part two of this week’s update is a new Fan Friday feature, which highlights some of the SWTOR fan art from the community and a new Fan Site Spotlight featuring SWTOR Life with a brief Q&A with Serge “Mikto” Stanarevic about the site.


The Fan Friday update also confirmed the 2011 events that BioWare and LucasArts will be showing off SWTOR at. Fans can look forward to seeing the Star Wars-based MMORPG following places:

The last part of this week’s update is all about sound. Audio Designer Scott Morton provides some insight into the sounds of combat and the design that goes into making the audio of SWTOR immersive and a key element to the gaming world. Morton details the creation process from conception to completion and offers a few videos to show how the sounds of the game change as they are refined

Q: Are there weather condition changes on planets? – Fyror
A: Each planet has localized weather conditions. Depending on the world the weather you will encounter will include rain, snow, sandstorms and many other unfavorable conditions; it just happens to be a constant for those worlds. For example, if you’re on Hoth you can expect moderate to heavy snowfall with the occasional blizzard.
Q: Was “stylized realism” the first art style BioWare decided on, or were other art styles considered? If so, what were they? – JakeLagerstrom
A: “Stylized Realism” was always the plan for the overall look and feel for the art of The Old Republic. Both LucasArts and BioWare wanted to give the art in SWTOR a style that could be easily recognizable as Star Wars, but really call its own. Many people draw comparisons to the Star Wars: The Clone Wars™ television series; however, being a fan of both the films and the animated series, I like to think that we are both and neither. I recently received a bit of art direction on a concept piece I was working on that simply stated “ya know, make it ‘Old Republic’y’.”
Q: When you are doing artwork for things not yet defined in the Star Wars universe, does BioWare offer up a bunch of suggested art pieces which LucasArts say yes or no to, or does LucasArts have a list of required features and BioWare artists work to that goal? – Infyrno
A: Yes, no and both. It’s an interesting question to answer because I find both BioWare and LucasArts give us (concept artists) a huge amount of freedom while playing in theStar Wars sandbox. We show our conceptual art to LucasArts and sometimes they have notes and/or suggestions. We are always open to making something better, more accurate or work for the time period.
Q: When artists go back to improve upon an area after they have learned more about it (like the example Robby Lamb gave us regarding the hacker enslaved to the Empire), I was wondering how much of the story the artists are given, or do they have to wait until release like us to hear the stories for each class? – Spektur
A: When we start work on a planet, the writing team describes as much of the story as they can. From that, we create concepts to match the story and ideas each planet represents. A big challenge we face when conceptualizing a planet is working in tandem with several other teams. While our talented environment team puts these areas together, designers and writers are also working on the same planet at the same time. Because of this, we have to make sure that we continue to work as a single unit, even with all these moving parts.
Q: What medium do the concept artists use to create the concept art? – MorgonKara
A: All the art is done digitally, though some of the artists begin with concepts sketched on paper. Once a particular design is agreed upon the artist will then scan the image and paint the sketch using Photoshop. Many of the artists (if not all of us) enjoy a good pencil sketch to keep our skills sharp.
Q: Will everyone have their own unique armor/look in the game, or will we be seeing some of the same armor/look on multiple people?
A: We have thousands of different armor/outfit combinations planned for the players and are currently still building this list and will continue to do so even after we launch. That being said, there will be millions of players, so there will be some crossover in their looks. Our main concern is that each player looks specific to their chosen class and has enough variation to allow the player to feel as unique as possible. For instance, if you are playing a Jedi Knight you will look significantly different from a Jedi Consular. You will also have opportunities to distinguish yourself from other players of your same class by going off the beaten path to find rare gear.
Thanks for joining us for this month’s Studio Insider! We hope you enjoyed Scott Morton’s in-depth look at the process of designing the audio in The Old Republic, as well as Clint Young’s answers to your art-related questions.
As we’ve given you an insight into audio, our next Community Q&A will be focused on sound and music. If you have questions on this topic, we invite you to post them in the Community Q&A thread.