As guilds gear up and get ready for the anticipated release of SWTOR, we notice some interesting statistics. While it’s all early info, there are some patterns taking place in the guild stats. “mlgoss” posted these observations which have us thinking, which faction will rule TOR? 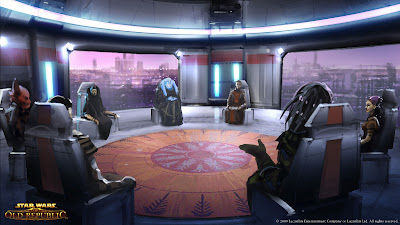 Here are some stats of guilds will 100+ members (based on those registered thus far):
And here are the member counts:
So it looks like the Empire is dominating right now. While all of the numbers are very preliminary and do not account for many people who have not signed up/joined a guild yet, they can serve to give us an idea of what the game makeup might be like.

If you’re a guild leader, this could be useful information to help you choose where your guild will play. But in no way should they be used to 100% define where you will play or what faction you will play.
As a long-time MMORPGer myself, I follow the try-it-for-yourself philosophy and we cannot do that until the game is released. In the meantime, my guild and I have a pretty good guesstimate of where and what we want to play but we’re keeping all options open until the game is here.

*Keep in mind though that these numbers are based on committed gamers that follow the game’s development before it’s released and that have already joined a guild or are part of a multi-gaming guild (like me).*
0
SHARES
ShareTweet