People are pumped up about SWTOR and while we wait for the anticipated MMORPG to finally be released, people are talking about what it will be like- both positive and negative. 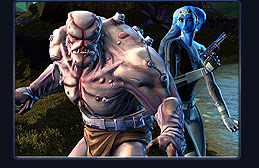 Lead Systems Designer Damion Schubert talks out in the SWTOR forums about the Companion Character mission system and how they will work with alts as well as while you are actively playing the game.
One forum poster asks if he was logging in playing one character, if he could have another character’s companions out collecting resources at the same time. Schubert’s answer was yes, which stirred up some more questions about farming and exploitation of Crew Skills. Is it possible that people could farm with their Crew Skills and exploit the economy of the game?
Schubert answers this by saying:
“There are some preconceptions about the missions system, such as that it’s an infinite money machine. Quite the opposite: it costs money to send your CC out looking for stuff, typically more than you can sell the returns for to a vendor. You can hit the jackpot, but this is because you find items that are of high utility to yourself or other players. For example, you might find rare crafting materials to make ubergear. The value in these items is what you sell them to other players for.

This is a delicate balance, of course, but a player who tries to farm non-stop is going to have a pretty severe cash flow problem, and basic economics says that if too many people are flooding the market with too many of the same goods, it’s going to be difficult for you to get a price for the goods more than the cost to acquire it. Supply and demand, y’know, which most of the time should self-correct.

Could you send every CC on every character out all the time? Sure, if you have infinite cash. It’s my team’s responsibility to be sure that doesn’t happen. =)”

What do we think? Well, if there is a way to farm and exploit the economy of an MMORPG, you better believe someone is going to find a way to do it. TOR is not likely to be the first exception.
0
SHARES
ShareTweet