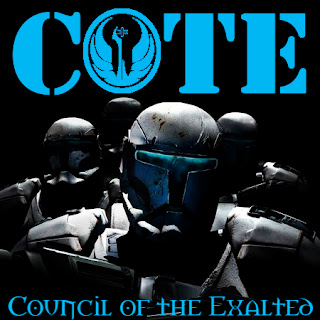 
Where did your guilds name come from?
Well me and my brother were just throwing out random guild names and then this one popped up and we thought it was awesome so we researched it and no one else had it so we created Council of the Exalted

Can you give me a quick 2-3 sentance description of your guild?
We are the Exalted, Council of the Exalted. We are the fragile line between victory and complete domination. We are in a word, “winners” Stay cool and keep your hood up. REPRESENT. We accept all classes and any race.

How did your guild come about?
Started as a family and friends guild that attracted members without recruiting and became what it is today, a successful growing guild.

What kind of play style do you focus on? PvE, PvP, RP:
We focus on more of a PvE style but that doesn’t mean that we will be excluding PvP opportunities. We will stick to our PvE base but are in no way excluding PvP, we will still play some PvP but not as much focused on that. As for RP I have no rules within the guild of being a roleplaying guild but I do not exclude roleplaying because this is Star wars and why wouldn’t i want to pretend I’m a jedi.

What is your guild set up? How do you run your guild?
Council of the Exalted has members and officer’s. I have active members that continue to post on the forums and threads to continue to keep our guild active and I have my officers which do a lot of inside job work for me in maintaining our website and keeping everyone happy. As for myself I try to think of the guild more as one unit. Whatever is decided on as a group is what happens and only on rare occasion will i veto my fellow members suggestions. I am very open and reasonable with everyone.

How serious do you play and/or run the guild?
I try to not ever be too demanding or in your face when I run my guild, I tend to try to aim for everyone’s agreement and that I’m making the experience better. So I would say that I do not run a serious guild at the moment but come game time I will kick everything up a notch.

Do you have ranks or a certain hierarchy in your guild?
Yes, we have a rank structure that has myriad ranks and multiple rank specializations you can become. Each class, Jedi, Trooper, Smuggler all have there own ranking structure that all correlate with one another so there is no confusion.

Why do you run a guild?
I run the guild because it gives me an opportunity to join people from different places together ll for the same reason. Also I am an agreeable person and a good leader, very suitable for this type of thing.

How do you approach Raid Planning?
At the moment I have no opinion on raid planning. I will decide when the time comes to do so.

Age Requirement?
I do not have a specified age requirement for Council of the Exalted, but I do have a thing about player maturity. I do not mind what age players are but I would like the maturity level in the guild to be better than a 12 year old.

Guild size?
I hope to have a constant increasing guild size till at least 100 or 200 members.

What makes your guild stand out from everyone else? What makes your guild unique?
Council of the Exalted stands out from other guilds by not being either the serious PvP or the serious RP guilds that other guilds dedicate themselves as. We don’t require certain things to be in our guild or having lots of experience or having someone who can contribute. What I run is just a class A guild that anyone can be a part of and there is no need to be an elite player or play 24/7. Not saying that some of my members wont be like that but the guild is more of a mixing pot of everything. All my members are extremely helpful and abide to you every need.

How do you spend your time until release? Do you know each other in real life or do you spend a lot of time on forums?
Our time spent during release is spent mostly towards the forums but I don’t force anyone to be on the forums 24/7. Although our website does stay very active with lots of people on everyday just to chat. About a fourth of the guild lives in Washington which makes a lot of things easier, and a small portion of the members are friends who come together for an occasional lightsaber war or two.

What Other Games are you currently playing as a guild?
Currently as a guild we are not playing any other games together but some of us do play starcraft 2 together and others play Guild Wars or WoW.

If somebody is interested now how and where can they apply for membership?
They can go to the Coucil of the Exalted guild home page and apply there:
http://www.swtor.com/guilds/121101/council-exalted
or they can visit out website:
http://cote.swtorwebsites.com/

One last question, if there was one thing you could ask the Dev’s to include, what would it be?
I don’t have anything I need the developers to include because the game is going to be every thing that I want.