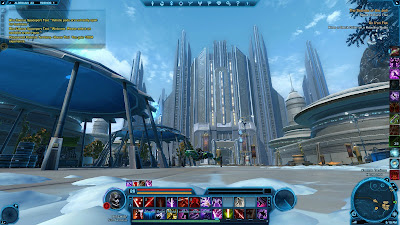 If you’ve been game testing SWTOR, you probably noticed that you couldn’t get in to the game today. This message was posted to the SWTOR community:

Hello Testers!
We are preparing to deploy a new build of the game for testing! At 12:00AM CST (6:00 London, 7:00 Paris/Berlin) on 11/29, we will be bringing the all game servers and SWTOR.com down for extended maintenance.

Note to weekend testers: Your phase of the Game Testing Program has now concluded, and you will no longer be able to play the game.
As part of the internal testing and deployment process, the game servers will remain unavailable for ongoing testers after the website is up at 12:00PM CST (18:00 London, 19:00 Paris/Berlin) on 11/29. We will update the stickies in this forum to keep you informed about when the servers will be available again. While we do not currently have an ETA, we expect the servers to be available again this week.

If you’ve been testing for some time now, you will know that this is not the first time they have brought the game testing servers down for a new build. New builds mean we are another step closer to the launch of the final game for everyone. It’s just another part of the process.

Amber Green, Game Testing Coordinator added some good news about this new build:
“Characters from the last phase of testing will not be wiped and will carry over to the new testing build of the game! (Note: characters from testing WILL NOT carry over to Early Game Access).
You will not need to uninstall this build and the new patch will not be the size of a new build! (This means no 20GB download!)
We are excited to get everyone back to testing, as this is our launch build and it will include wide array of improvements, bug fixes, and updates! Your participation and feedback are truly appreciated!

Please watch this thread for any updates or new information as they become available.”

So there you go testers, we are one step closer to the release of SWTOR. Are you ready?
0
SHARES
ShareTweet