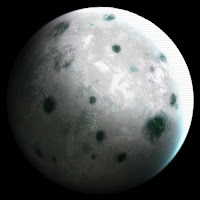 Belsavis was a planet in the Ninth Quadrant, which was a region of the Bozhnee sector. Ice-covered, its average temperature was in the -50s. It was located on the Belsavis Run

At some unknown point in the past, the planet became one of the many worlds that belonged to the Rakata Infinite Empire. During that time, the Rakata made use of the world as a prison colony where they placed many dangerous prisoners that remained trapped for the millennia. It entered an ice age around 5,000 BBY. Its inhabitants dwelt in three volcanic jungle rifts.

Read all about Belsavis here, and check out the datacron locations below:
Don’t forget to check out constantly growing list of guides for Star Wars: The old republic

From here you might want to zoom out, pan the around to view below you, if you can’t see the outline of a small bridge, try looking east with the (and your character near the edge of the outcropping still) and then look down again, you’ll eventually be able to see faint blue outlines of a very narrow nearly invisible bridge. Once you have a good view of it, you’ll need to make a precision drop down to it, as well as a precision/straight run to the other side to the island. Grab the Datacron, and behind this part of the island is a rakata transport that takes you to another transport.

71 – [Green Matrix Shard] X: -3484; Y-866 (inside the Cave Under Tree) The Tomb – Go to The Scar (it’s the area covered in snow with a huge volcanic pit dividing the north and south ends) and look for little lootable items on the ground called Rataka Energy Cores. They look like little blue datacrons. Once you have 4 of them, go east to The Tomb area and near the middle of map, there is a giant tree (It’s on the map) that sits on a plateau, with a cave running through the middle of it (path running through it also on the map.) In that cave there is an elevator, take it down, put the 4 energy cores into the machine.

First find the elevator to Cave Under Tree on the Tomb map, the location is (-547, -2172). Take the elevator down and travel straight through to the far end of the room. The glowing cube is there with a quest reticule above it. Before the Datacron is a machine that is powered by 4 Rakata Cubes. Rakata Cubes are found all over Belsavis. They spawn at random hidden locations. Two of the locations I made notes of are:

You must place four cubes into the machine and then activate it in order to get inside the Datacron. The Rakata cubes are grey/white and are slightly smaller than Datacron cubes. Also, the Rakata cubes do not glow.

This Datacron is currently BUGGED and does not actually provide a shard. Upon first accessing it the animation says it will provide a Green shard, and then says you acquire a Yellow shard, but nothing is actually added to your inventory.

Tarkin is mega THICC tho in bad batch.

"Clone wars? what are you talking about?"

So love has blinded you.