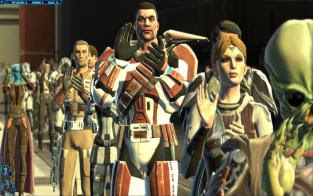 Some are saying that SWTOR is not selling as well as it was first expected. There has been a bit of an outcry over this in the industry but one analyst group doesn’t think the concerns are that big of a deal. According to Gamasutra:

Analyst group Macquarie Securities has released a new report which states that, while there are clearly concerns in the industry that Electronic Arts and BioWare’s recently released Star Wars: The Old Republic isn’t selling as well as first hoped, these outcries are “overdone.”

The story goes on to explain that while SWTOR releases last month and passed 1 million paid subs in three days (a record for MMOs), EA has still seen a drop in stock price of 3%.

This analyst group thinks that many of the issues that are being brought up about SWTOR are actually based on conjecture and says that just because EA has not yet releases sales figures for SWTOR doesn’t mean the numbers are bad.

They say the concerns over sales might be overdone. Really, this makes sense. With game as big as this one, it’s only expected that rumors will be just as big as the game itself. There are many who want to see it fall and may jump to conclusions before anything has been confirmed.

Gamasutra goes on to say:
The analyst group, which also gives EA an “Outperform” rating, adds, “EA will generate significant operating profits from Star Wars in both [fiscal 2012 and 2013 (ending March)], and will generate considerable revenue growth year-over-year.”