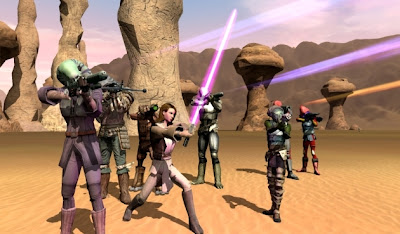 Recent events in SWTOR have led to a great deal of conversation about PvP in SWTOR and PvP in games in general. This is an age-old debate and you can never make everyone happy in a video game, especially in PvP aspects of it. However, there are certain things that can be done to ensure a better game experience for the players and honestly, some games just severely fail at doing so.

Death Fist has some ideas about solutions to World PvP in SWTOR:

To be frank, no game has nailed World PvP. And some games, like Warhammer Online, died because they couldn’t provide a meaningful, competitive World PvP game for their customers.

Sadly, it doesn’t look like BioWare learned the BIG World PvP lesson from Warhammer – gamers will always travel the path of least resistance to achieve their goals.

Ah, isn’t that the truth? As gamers, we depend on the developers to give us great games and quite honestly, we sometimes get let down. But from those disappointments and those successes, we learn more about what we want. The game developers can learn a great deal from the gamers who play the games and by listening to our ideas, they can improve games. The guys over at Death’s Fist have some good ideas about PvP.

They explain:
People like to point out the “good old days” of World PvP in WoW – South Shore vs. Tarren Mill. And those of us who played SWG remember World PvP fondly. But the eye in both situations was the lack of any kind of game system or benefit. You World PvPed because you thought it was fun. Those who thought it was a waste of time didn’t.

They go on to explain some ways that SWTOR PvP could be improved and also to compare it to PvP in WoW ,especially in the early days. There are some really good points made here. Take some time to read it over and tell us if you agree or not.

We did an interview with  Death’s Fist  back in November. You can check it out here.
Death’s Fist is a progressive adult guild currently playing Star Wars: The Old Republic. We promote teamwork; a fun, drama-free adult atmosphere; freedom in game; and decision making by guild-wide consensus while excelling at all aspects of an MMO.