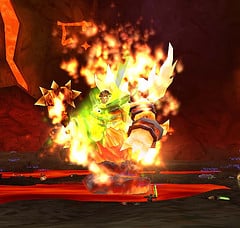 A recent article on Gamasutra discusses the decline in Blizzard’s World of Warcraft subscriptions and claims it might be attributable to SWTOR, at least in some part.

In an interview with Eurogamer, senior World of Warcraft producer John Lagrave said that the game’s recent drop in subscriber numbers “has to at least be attributable” to the release of The Old Republic, although he did not divulge updated subscriber numbers.

“We certainly do look at [where WoW players go], and we have a very smart bunch of guys who do our analytics for us,” he explained.

He continued, “It certainly has to at least be attributable to The Old Republic,” but added that “it’s also attributable to people who want to wait and get Mists of Pandaria [WoW expansion pack due for release later this year], so it’s not surprising.”

It certainly makes sense that at least some of the subscription losses are due to SWTOR. I know for a fact that at least 20 from my guild left WoW for SWTOR either during SWTOR beta or shortly after launch. Some left months before, knowing that SWTOR was coming and having grown bored with WoW.

This isn’t to say that WoW is a sinking ship- far from it. Many MMOers have left WoW before for new games only to come back when those games didn’t fulfill their promises or their expectations. If SWTOR hopes to keep a portion of WoW’s subs, they will have to continue to provide new, interesting content for years to come.

Do you think BioWare can do it?