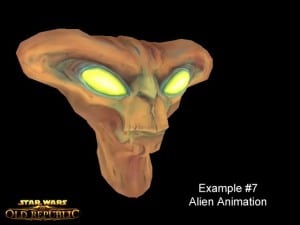 The Arcona are a species of intelligent, limbed serpents native to the planet Cona. Their desert world is devoid of free water, but has dense concentrations of ammonia. The Arcona evolved claws to get at the water pods concealed beneath the rocky soil of Cona, and ammonia is employed in a supplementary circulatory system used to rid waste from their bodies.
The Arcona’s eyes, set wide apart on their anvil-shaped heads, have thousands of individual receptor cells that register color, but give no delineation to form. It is the bulbous, diamond-shaped heat-sensing organ set between their eyes that brings their blurred multicolor world into focus. The Arcona sense of smell is based on their long, flickering tongue that collects molecules for analysis.

Arcona live in loose, family-based collectives called nests that are ruled over by the Grand Nest. The society arose from the need to protect the young Arcona. The need for community is so strong that Arcona lack a sense of individuality; they rarely speak of themselves in the first person and instead use the pronoun “we.””

Cona has been a source of metals and minerals for galactic corporations for centuries, and in that time, a peculiar blight has hit the Arcona populace. The results of salt—simple sodium chloride—interacting with their optic nerves creates an addictive, hallucinatory array of colors in their vision. As a deadly side effect, the salt destroys their ammonium-utilizing pancreatic organ. Arcona salt addicts will do whatever they can to feed their addiction, while Arcona non-addicts will attack those smuggling salt to Cona. The female Arcona, which are generally less responsible than the male, form the bulk of the addict population. Addicts need 25 grams of salt per day, or they will suffer physiological pangs of withdrawal. Arcona salt addicts are easily recognized by the color of their eyes—they are a glittering gold instead of the usual green color.

Before they made contact with other beings, the Arcona were not technologically advanced. Although they eventually used sentient technology, they never developed any of their own. When scouts from the Old Republic first arrived on Cona, many Arcona were extremely enthusiastic about exploring the galaxy. Oftentimes, whole communities sought to travel off-world. As a consequence, Arconan colonies were quite common throughout the galaxy. After becoming used to other species’ technology not present on Cona, the Arconan were commonly seen in every spaceport in the galaxy.