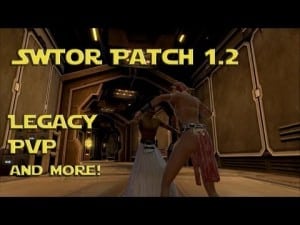 I sat down at the table attempting to finish writing an e-mail to my professor. My phone lit up.

“Dude did you see it?” Before I could reply another text from another friend appeared on my phone.

“Dual spec!!!!!” A smile began emerging on my face. Another text confirmed my suspicions.

“My trooper is gonna have baller ass purple armor!”

Welcome back to another Intergalactic Intel! A little while ago patch  1.2 hit. With so many big changes coming we can only be excited, but let’s take a closer look at each of the new features that have arrived.

Since the beta we’ve had very little idea about what the legacy system actually does. At the guild summit we learned that characters across both factions are apart of a single legacy, which in turn gives various benefits for people leveling classes and races to max level.

The first benefit we get is class buffs. If you have a level 50 trooper, all of your characters gain bonus health from fortitude at all times. This is a great, mostly because players don’t have to worry about not having certain buffs. It’s a fairly nice feature, but I would prefer to have it disabled in pvp, operations and flash points. Restricting these features is important to give everyone a purpose.

Let’s say we figure out marauder/sentinel DPS is the best melee dps in the game. The top guilds aiming to complete operations will leave Guardians/Juggernauts, Shadows/Assassins and Scoundrels/Operatives from their operation roster. Why bring the others if they don’t give any true or great buffs or debuffs. This was an issue that ran rampant in World of Warcaft Classic, and in The Burning Crusade. Bioware needs to make all of the classes wanted and unique to operations.

The next large benefit we get from the legacy system are cross class abilities. This is another unique feature that I’m glad to hear about. It’s only safe to assume that Bioware will be taking iconic abilities from each class and allowing you to use them once that class has hit maximum level. Again this needs to be disallowed in PvP. A Guardian with a emergency medpack ability scares me, almost as much as fear chaining warlocks in Burning Crusade. If allowed in PvP it’d be almost impossible to balance the amount of combinations that would appear from the imagination of players.

One thing I don’t agree with is the restriction of legacy abilities in flash points and operations. Giving classes access to can trivialize various operations and flash points, but gives the players a unique feeling to their character among other classes in their guild or group they run with constantly. A weaker version for PvE encounters I believe are fair game, as long as they aren’t powerful defensive or offensive cool downs like a Shadow’s Resilience ability.

I do however like the added depth they are giving to characters. Each player wants their character to look and feel unique. Most game companies are unable to create that in MMOs without a ludicrous amount of equipment. The small subtle changes and effects that are granted through the legacy system are great for creating a unique and interesting character.

Bioware announced that players will have the option to change their UI, a well requested feature since early beta. Basically Bioware is allowing its players to resize and move the UI around to their liking. A fine start.

I’m rather disappointed with the lack of integration of community made mods. Damage and threat meters are staples of the MMO experience. Changing sounds, and UI skins are all tiny changes that players love to make. Bioware would be doing themselves a large favor by allowing player created mods. This may simply be a limitation to the Hero Engine that The Old Republic was created in.

At the guild summit the ability to customize one’s character. One thing I loved about the Old Republic was how I looked like a Jedi shortly after achieving the title of one. The gear I obtained as I leveled up looked phenomenal in many ways that would leave me blabbing here for far too long.

In patch 1.2 the newest tier of PvE gear will be able to have an armor piece removed and inserted into another piece of gear to give it that set bonus. Meaning we can take mods out of gear we don’t like aesthetically and transplant the stats and effects into other pieces of gear that we do like the look of. Bioware plans to get us attached to our characters, by giving them a personal look that goes along with their personal dialogue we’ve created during our story line.

With a new Warzone in 1.2. I am greatly excited. The warzone is another area control map similar to civil war, but the difference being in how you capture points. Points are captured and controlled by having players stand near the points. The more players there are the faster it captures.

I personally love this warzone. Having played it a few times on the public test server, I felt like I was playing Star Wars Battlefield 2 on my playstation 2. The added effect of faction vs faction on this map makes it all the better for imperial players.

I apologize for the lack of updates life has been rather stressful recently, but expect another article out this weekend!