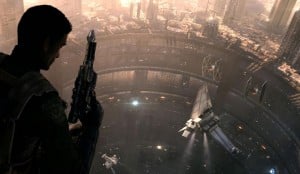 Late last month, LucasArts took the wraps off Star Wars 1313, a third-person action-adventure game set on the planet of Coruscant. At the E3 conference in Los Angeles last week, LucasArts has debuted the first batch of footage for its forthcoming title – and safe to say, it resembles very little that has come before.

In the clip, which features a cut scene and a few seconds of gameplay from a PC version of Star Wars 1313, a nameless bounty hunter descends hundreds of levels below the surface of Coruscant, to an area called 1313. There, some sort of accident leaves his transport vessel in flames, and the bounty hunter is forced to leap and scramble from one fiery scrap of metal to another.

“”Star Wars 1313 dives into a part of the Star Wars mythos that we’ve always known existed, but never had a chance to visit,” Paul Meegan, the president of LucasArts, said in a statement. “”We are committed to bringing the best gameplay experience and visual fidelity to life and I truly believe the work we are showcasing at E3 will speak for itself.””

Unlike other Star Wars titles, reps for LucasArts said, the hero of 1313 won’t use supernatural Jedi powers. Instead, he’ll use “human skills and gadgets.” Think: extraterrestrial MacGyver. Or interplanetary Sherlock Holmes.

So what to make of the new Star Wars game? Well, Mike Sharkey of GameSpy is optimistic. “”At the very least, it looks like Star Wars. Hey, at this point, if I don’t see a dancing Han Solo, I’m relieved. Sure, it’s almost like Uncharted’s Nathan Drake was somehow transported into a galaxy far, far away, but,” Sharkey adds, “that’s not necessarily a bad thing.”