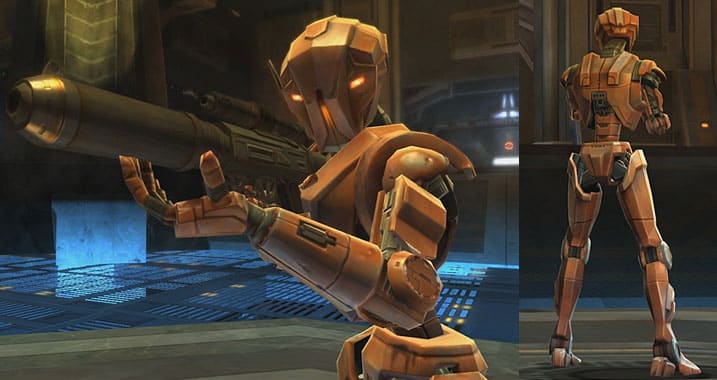 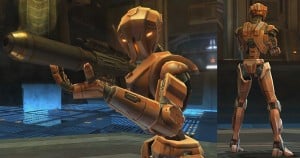 SWTOR/BioWare had some exciting news to reveal today. In this update at SWTOR.com, they tell us about HK-51.

Buried deep beneath the icy surface of Belsavis rests an army of the deadliest, most feared machines in the known galaxy. Thought to have been lost when an Imperial freighter was destroyed, they have recently been rediscovered by a group of renegade Sith Lords. Now both the Sith Empire and Galactic Republic seek to control these dangerous weapons for themselves. Those who are brave enough to venture into the wreckage will emerge with a powerful new ally.

We are excited to unveil the dangerous assassination droid HK-51! Cold, calculating, and ruthlessly efficient, HK-51 will stand by your side and loyally follow your command as you and your allies continue your journey. Journalists were given a brief preview of HK-51 at E3, but now we are happy to be able to show everyone at San Diego Comic-Con, and all of you at home, the full trailer.

What’s more awesome than a new assassination droid? Fans of the HK series are going to be super excited to hear about this. We saw the preview at E3 but we didn’t know when or how the HK droid would appear in the game.

BioWare tells us a little more in their news report:

You will be able to recruit HK-51 in to your party in the very near future, so be sure to come back to www.StarWarsTheOldRepublic.com for all the latest news. Also, don’t forget that you can stay up to date on the latest news and announcements on Star Wars™: The Old Republic™ through both Facebook and Twitter!

So what do you think? Excited about HK-51? We already know it’s going to be awesome in-game but let me ask you another fun question. What would you do if you had an assassination droid as your companion in real life?