Something is asunder in SWTOR, at least that’s what one user who took this screenshot would have us to think. They protested by blocking GTN mailboxes and sending out this message “Occupying GTN mailbox for 2 more quick bars for free to play players!”

One major downfall to their plan? All you’re doing is irritating your fellow players. This is not the way to get your way with BioWare but it might be a decent way to get a ban- temporary at very least. Players used to do this in WoW all the time until Blizz started banning for it and putting it more mailboxes all over the major cities so it hardly matters if one idiot wants to get on a huge mount, drink a firewater and sit on the mailbox.

But what we can admire from these SWTOR “riots” is their determination and willingness to stand up for something. But are they doing it the right way? This isn’t the first time gamers staged a “riot” in a Star Wars game in order to protest something they felt was unfair.

This reminds us of another similar uprising in Star Wars Galaxy over Wookiee armor. When the game first launched (for those who didn’t play or don’t remember), Wookiees could not wear armor and in the weeks and months that followed, players continued to complain in the forums to no avail. So they ramped it up a notch and staged protests in front of Theed palace on every server at the exact same time, sort of like an in-game flash mob.

But all this did was lead to some catastrophic lag on the server, forcing SOE to issue bans to players who refused to disperse.

We heard the rumor going around SWTOR forums and Reddit so we had to investigate and find out what really happened. Apparently, Reddit got trolled hard this time (see the sweet irony in that?) and this speeders-on-the-mailbox incident really had nothing to do with angry F2P gamers.

It was actually a virtual nose-thumbing at one guy, “Ewenn” who had some gamer-rage over a couple of people blocking the mailboxes and didn’t know how to ask nicely. 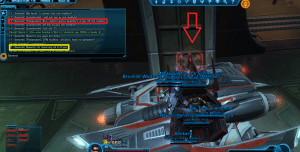 The Alpha Guild posts the image and the actual story to their Facebook page:

“Want to get to the GTN mailbox? Ask nicely. The whole fleet responds when Ewenn, the rude one, yells at TheLastDon to move his throne instead of asking nicely.

Then confused people like Flashthunder takes a screenshot as he thinks it’s a riot. Juandonde, an Alpha Republic and subber, trolls redditers hard.”

And then chaos and confusion reigns. But we definitely got a good giggle out of the whole fiasco as did the guys at The Alpha Guild.

Now that we’ve all had a good laugh over it, the fun continues as “the 1%” jokes around over the made-up protest.

Are you the 1% who subs and gets all the goodies? Want to rub it in to the F2Pers faces that you get #5 and #6 quickbars to place all your pets and novelty items? Next time they block those mailboxes, just summon your mail droid next to your on-ship mailbox.