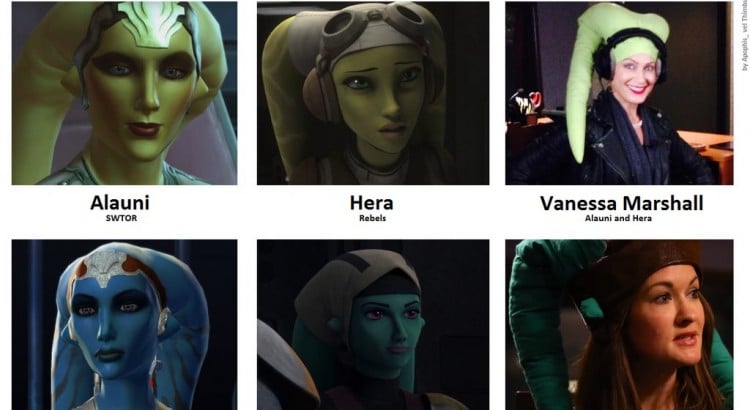 Twi’leks are a loved race in all of Star Wars. Did you know that they actually have something interesting in common in Star Wars Rebels and SWTOR? They share a voice actress. Vanessa Marshall voices Hera in Rebels and Alauni in SWTOR. Catherine Taber voices Numa in Rebels and Vette in SWTOR. Also, if Taber’s voice sounds familiar, it’s because she was also Padme in The Clone Wars.  She was also the voice of Mission Tao in KOTOR.

As you can see, the voice actors of Star Wars games are a close knit group. There are definitely cross overs and not just with Twi’leks. But this was a happy little coincidence that we just had to bring to your attention (if you didn’t already notice). One thing that many Star Wars fans love is knowing the people behind the characters and behind the voices. It really makes you feel like you are connected in a deeper way.

Speaking of actors who have played more than one part, this article on StarWars.com tells us about eight Star Wars voice actors who played multiple parts in animated series. Some of them you might have known but there were a few and their roles that were new to me. If you have not read this article yet, we suggest you head on over and see the 8 actors on their list and all of the roles they played. You might be surprised by some of them yourself.