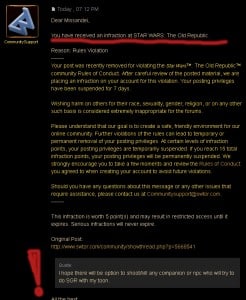 It’s no surprise that not everyone likes same gender romance in SWTOR. It’s been battled before in other games and it has been opposed in SWTOR previously as well. But with the recent update from BioWare about their intentions to add it to the game, there was one forum user who became exceptionally vocal about it Reddit, after being banned from the SWTOR forums for 7 days for “hate speech””.

Missandei believes that being gay is an illness. Before we completely jump on the guy, he also says that doesn’t make them bad people; just sick people… His belief is that he doesn’t care if you’re gay if you keep it to yourself and not try to “infect others” but when you try to convince others your gay ways are right, he feels intruded upon.

He says, “I am against any promotion and any advertising of the unhealthy behavior such as SGR. In private you can do anything you want.”

And while very few agree with him in the SWTOR (his comments got many downvotes), it brings up a good point about how some people feel. There are some who believe that by putting this type of content in a game, you are supporting it or condoning it (many who support SGR will agree). But some, like this guy, just don’t agree that there should be gay people- real or digital- at all.

But we could talk about the gay issues all day and I assure you those opposed would not come to agreement. This particular point is about a video game- where things are not real and much is left to the imagination, where romance arcs are optional and not necessary to the story line, and where it is just as easy to skip over the content you don’t like or don’t want to do.

So why are some who are opposed to SGR so wound up about publicly opposing it and sometimes outright attacking others who support it? Why don’t they just ignore it and go on about their business? It seems that some are some who are so personally insulted by the mere idea of homosexuality that they are offended it’s even in the game. I can respect that opinion (without having to agree with it) but my opinion would be to avoid the game.

I don’t play the Grand Theft Auto series because I don’t agree with or feel comfortable with some of the content. I’m not seeking to have it banned or going to the gamer forums and attacking the people who do play it; it’s just not for me so I find other games that I do enjoy and that’s that.

I don’t disrespect the opinions of those who don’t agree with homosexuality but I don’t see in any way how SGR in SWTOR is forcing anything on them. If you don’t like it, skip it and if you really don’t like it, boycott the game. Those are your personal rights. However, the game shouldn’t be forced to change because of your opinion and BioWare has already made it pretty clear where they stand on this particular issue.

What do you think about the issue of SGR in SWTOR? Do you think having it in the game is advertising the behavior?

*This Reddit thread spun off a post in the forums in which the same user named above posted “I hope there will be option to shoot/kill any companion or npc who will try to do SGR with my toon.” He was issued a 5-point infraction and a 7-day ban from the forums for his comments.*