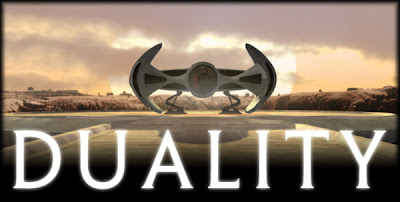 Duality is one of the most popular Star Wars fan films ever made. It was quite an acheivement in it’s time, and is still regarded as a model of achievement for the quality of the CG work in the film. The film was filmed entirely against a blue screen at Alamo films. Duality was made as a follow-up project to Duel, and has even sired a parody call Two-ness.

The story is basically this: two Sith apprentices are set against each other as a final test to determine which one will serve at their master’s side. And so it is that Darth Oz watches as Darth Blight and Lord Rive battle to the death…..

The script was first written by Mark Thomas, with Dave Macomber devising the fight. Filming took place at Alamo Studios in Santa Barbara, California in September of 2000. A teaser trailer was released in November 2000, which featured a slightly different Sith ship and chamber entrance.

Post-production was split between Thomas and Macomber. Thomas primarily handled the digital backgrounds, 3D models animations. Compositing the footage and the lightsaber effects went to Macomber. Lastly, Thomas edited the sound and made the final cut.

Crew of Two’s site featured extensive break-downs of the process.

Fan reaction to Duality was mostly positive since its release. Many fan film directors, such as Nick Hallam, have since cited it as inspiration for their own films. If nothing else, it proved that film-level special effects could be produced by the common fan.

Duality has been featured in articles in Apple.com, and Entertainment Weekly.