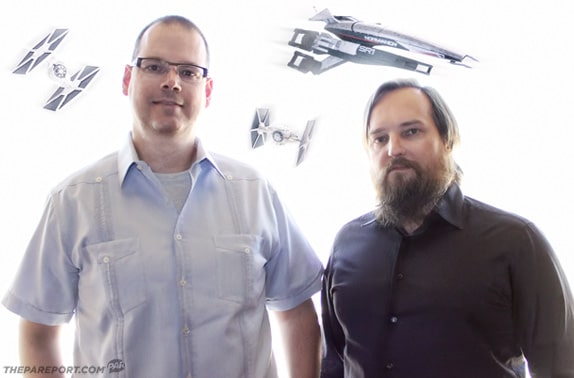 GDC 2013 is coming up soon and word has it the BioWare founders Dr. Ray Muzyka and Dr. Greg Zeschuk are getting a very special recognition- the lifetime achievement award. Personally, I’m happy to see them be recognized since the docs have really contributed a great deal to the gaming world, including SWTOR.

As Ten Ton Hammer tells us:

BioWare founders Dr. Ray Muzyka and Dr. Greg Zeschuk have been responsible for the formation of one of the top RPG studios in the world. That creation has led to some truly fantastic games such as Knights of the Old Republic, the Mass Effect series, Baldur’s Gate, the MMORPG Star Wars: The Old Republic, and many more. Suffice to say, BioWare has crafted some of the greatest RPGs in gaming history, and at this year’s Game Developer’s Choice Awards at GDC, the founding doctors will receive the Lifetime Achievement Award for their contributions to the art and science of games.

As we reported here earlier in the year, both doctors retired from the gaming industry (and walked away from BioWare and SWTOR) to pursue their own interests in other industries. We wish them well and we’re happy to see them get some much-deserved recognition. I’m sure their time with BioWare and the hard work they put into it will always remain a very important part of their lives.