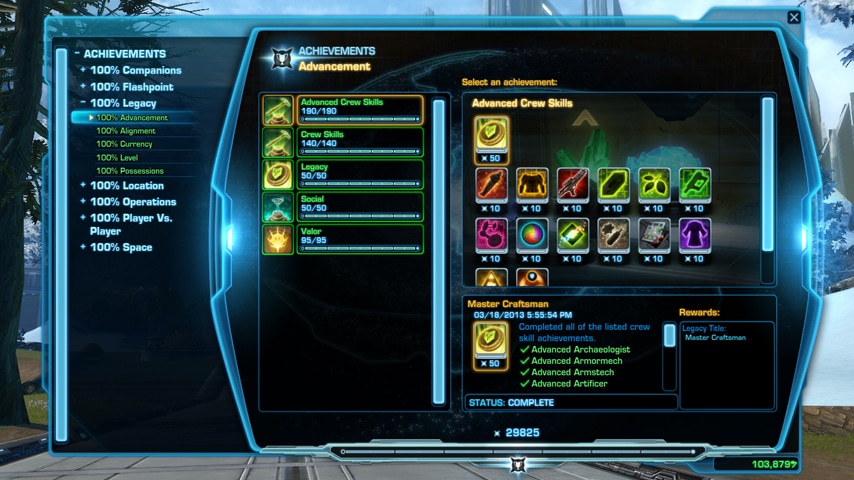 With all the action yesterday with Disney closing down Lucasarts, We completly missed that BioWare posted a new Developer Dispatch. This time the topic is Legacy Achievements. Lisa made an extensive guide to this back in February wich you can find here. However, the article BioWare just posted does  good  job of explaining it as also.

Achievement Completed: Breaking the Writer’s Block. Description: Wrote the first sentence of my developer blog. This achievement doesn’t reward me with a title, but it does increase my Galactic Reputation with the Community Team, so I’ve got that going for me!

Game Update 2.0: Scum and Villainy introduces the Legacy Achievements system, a means of recognizing important accomplishments and milestones for your entire Legacy. Achievements are like badges awarded for completing content, defeating enemies, exploring new regions, and a whole lot more. The Achievements you gather are displayed in a new section of your Legacy panel, where they can be viewed by other players to see how much you have accomplished with your Legacy.

What sets Legacy Achievements in Star Wars™: the Old Republic™ apart from similar achievement systems in many other games is that actions from all characters in your Legacy contribute to your Legacy Achievements. Need to discover and dance with 100 kinds of womp rats on Tatooine? No sweat—dance with 50 of them with your Scoundrel while he is on the planet and then go dance with the other 50 later with your Powertech. Your progress is tracked across both characters and the Achievement and its rewards are available to all characters in your Legacy. So you are always contributing to the same set of Achievements and rewards regardless of which character you are playing.

Additional Legacy Achievements will continue to be added with future content in Star Wars: The Old Republic. New regions, Flashpoints, Operations, and content of all kinds will have new Achievements in the future with new rewards for you to collect. The initial set of Achievements delivered with Game Update 2.0 comprises more than 2000 individual Achievements and nearly 30,000 Prestige points to collect. We are looking forward to expanding the types, complexity and range of Achievements that you can earn, We plan to continuing to push the Achievement System further to encompass every part of the game now and every part of it going forward.

Check out the full article here. For anyone  who wonder, I’d be surprised if prestige points were valid for anything. They MOST likely will not be a currency. They are a point system to represent your completion of the game challenges. They worked that way in WoW and I’m fairly certain it will operate the same way here. That being said, specific achievements will still have rewards in addition to e-peen points. But the e-peen points themselves aren’t ‘exchangeable’ for something.