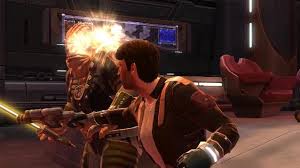 The below 2 posts are posts by a developer, not suggestions by players.:

Hey Folks,
This is the list I’m looking at to put in, mostly based on the feedback y’all have given here (using Imperial names because that’s what I have in my notes, don’t hate!)
Add an Interrupt to Jarring Strikes 50%/100% chance to activate (So you can interupt an active cast with Hidden Strike)
Add 10%/20% DMG Reduction to Revitalizers to the duration of Stim Boost (this is IN ADDITION to the healing)
Add 15%/30% AOE Damage Reduction to Shadow Op Elite
Hit me with your feedback based on this list!

Original Dev Post:
Hey Gang,
So something we want to do in 2.8 is see if we can’t add a bit of survivabilty into the Concealment/Scrapper trees, with possibly a focus on events happening as you exit stealth. We’ve got a couple ideas, but nothing concrete yet so we want to see what y’all would like. Things to keep in mind as we discuss:
No Brand New Abilities: At this point in time, we aren’t looking in adding a whole new ability
No Crowd Control: It is extremely unlikely that we will be up for adding in (or adding back in) more crowd control (I’m looking at you old Jarring Strike)
Moving on to the discussion, here is my current entry into the brainstorm:
I sort of like the idea of having Hidden Strike/Jarring Strike adding either a debuff to the target or a buff to the Op/Scoundrel that offers some defense for a short time, to help prevent that “I pop out from stealth and immediately get exploded” feeling. Maybe in the vein of crowd control protection for the Op himself, or just some flag damage/accuracy defense.

Thoughts on this by ChilastraRanger:

Operative/Scoundrel is currently the only 4-meter DPS class in this entire game without talented 30% AoE DR. So that must be added. In addition — we need at least 2 of these suggestions, or something similar to those suggestions implemented.
Don’t add 20% DR to Revitalizers, that’s a joke. Nobody takes Revitalizers as a talent. If you do (god forbid) add DR to Revitalizers, then you need to lower the 2 minute CD to something reasonable like 1.5 min or 1 min. Nobody will waste those precious 2 points on 20% DR every 2 minutes when they NEED those points in other skills in order to be viable, namely in things like Slip Away, etc. I’m referring to PvP here mainly.

Please do add the 20% DR (maybe something more like 25% or 30%, if its on a longer CD) — just not to Revitalizers. Pick a different skill talent to add it to, preferably one that people actually take — such as Inclement Conditioning, or Advanced Cloaking, for example.
Personally, the buff we NEED (in order to help make us more equal, not overpowered) would be a buff (maybe tacked on to Advanced Cloaking, Infiltrator, or Ghost) in which we get 5/8% DR and/or CC immunity upon exiting stealth/entering combat for 2/4 seconds. Of course, this is a rough example, and the Combat Team would know far more about the percentages/math to make this reasonable. This also would be in addition, preferably, to the other suggestions.
I understand the Combat Team/Designers want to move away from the stuns/CCing that currently ruin the game. I support that move. Hidden Strike doesn’t need to stun anyone, I guess. However, Hidden Strike should ALWAYS be an interrupt. That only makes sense, given the nature of the ability (surprise attack from stealth + root).
However, if the Combat Team continues to move away from stuns/CC, especially in PvP, then it is finally time to REMOVE POSITIONAL REQUIREMENTS from Backstab, Hidden Strike, etc. Less stunning = less opportunities to use your best abilities often. Doing this would actually improve our survivability, and it requires no new skills or damage increases. If you can’t CC people effectively, then you can’t even use your hardest-hitting abilities, meaning simply that you die faster in all encounters.
No other class has such rigid restrictions on their (only) top-tier damaging abilities. Sins have more DR, and several other high-damage options other than Maul. Conc. Operatives, however, rely on two skills: Backstab + Hidden Strike, to really hit hard. Acid Blade only works with those skills too, so if can’t regularly get behind your target — you can’t even use Acid Blade as regularly as you realistically need to. Or, do things like improving our stealth level, or allowing Acid Blade to work with more abilities.
Let me make this as utterly rudimentary as possible, BioWare: Make us at least roughly as viable in PvP as Sins, and make us at least roughly as viable in endgame PvE as Snipers. At 55/Ranked in the current end-game meta, Operatives aren’t picked for stuff 99% of the time, and it needs to stop. Despite our PvE parses, it’s obvious we are actually towards the bottom of the barrel.
I don’t want to be “Overpowered.” I want to be equally viable to the other classes in this game. It’s shame, given the fact that this class has arguably the best class story , aesthetics, etc. in the game.
55 Operative, Valor 70 55 Scoundrel, Valor 60