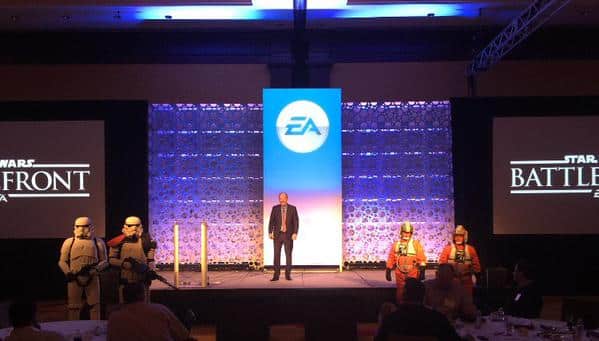 Many fans around the world are expecting something fresh and new with DICE’s new Star Wars: Battlefront, which is set to release late in the year. The game will be in big competition with the Call of Duty series and their new game to be released later in the year as well. After fans of the Battlefield series ranted about Battlefield 4 being a major let-down, the franchise is taking time to create something better.

With Hardline set to release in a few weeks, the pressure building on Star Wars: Battlefront to perform during the holiday season is rising. Besides a few concept images and the developer talking about the game reenacting some of the most famous battles in the Star Wars universe, we have not seen very much. However, this could be changing soon.

Footage from Star Wars: Battlefront has been shown to retail reps at a private event that was held this week, according to a report from StarWarsHQ. Does this mean that we may be seeing footage in the very near future?

We certainly hope so, but everyone is wanting to know when, we need an exact date. E3 is soon to be happening and we think there may be a reveal during this time. DICE has previously talked about a spring 2015 reveal, so this news seems very likely.

We also know that DICE has been granted permission to have access to movie sets for The Force Awakens, they needed to take scans to use in the game. Maybe Battlefront will be set more closely to the new movie, rather than the older games in the series.

The only thing we can do now is wait and see what happens and cross our fingers that we will see some real footage very soon.

EA COO Peter Moore even took to Twitter with glee at the positive reaction to DICE’s progress: “A GREAT show with my friends/partners @GameStop. Superb ovation for latest gameplay footage on @starwars Battlefront.” Rumours are running rife that said footage will be getting a public airing in the near future – if it doesn’t leak in the meantime, that is.